THE BLUES
It's blueberry season, and boy, do I have the blues.....blue fingers, blue nails, blue towels.....blueberries do stain, but are they ever worth it.
My sister recently married the largest supplier of blueberry nursery stock in the world.  Dan Finch, of Finch Nursery, has had blueberry farms in Spain and Chile, as well as his test fields in Bailey, NC.  Last week, they invited the hubby and I down to go blueberry picking, which Steve had never done.  Amy and I ate about as many berries as we put in our baskets, but the guys quickly tired of picking them by hand.  Dan retrieved a tarp, and Steve shook.  They were rewarded with a bounty of berries - both beautiful, plump and ripe, along with the pink and green ones, twigs, leaves and other detritus.  Then the question was how to get rid of the unwanted. 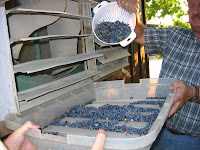 Dan is also a premier potter.  His solution was turn on the huge fan in his pottery workshop, and allow the wind generated to blow the twigs and leaves out.  Didn't work real well, fellows!
We wound up handpicking through the berries the next day, all day, as a matter of fact.  But it was worth our efforts.  Eat a few, pick out some leaves, eat a few more.....
I froze gallons and gallons of berries.  First, I placed a layer of the clean berries on a large cookie sheet for at least an hour.  Then I placed them in freezer storage bags.  Done this way, they won't stick together in the freezer and you can then pull out as many as needed, say a cup or two for muffins or smoothies.  Frozen, they're great to just pop in your mouth!
We've had blueberry cobbler, blueberries on granola, blueberry lemon tart, and even tried a savory blueberry sauce with rosemary and thyme to serve with a pork tenderloin.  We all decided it needed some oomph....some hot peppers.  Next to re-try is a blueberry salsa which would  be dynamite paired with pork as well as chicken.
ABOUT NC BLUEBERRIES
Last year I tasted my way through Dan's test field, amazed at the difference in taste from one row to the next.  Some were sweeter, some more tart, some smaller, some darker when ripe.
Most of NC's commercial crop are highbush varieties grown near the coast in boggy soil, ready about mid-May and harvested through the end of July.  Varieties in the western part of the state get ripe in August.  Wild varieties can be picked along the sunny ridges of the Blue Ridge Parkway, but be wary of bears who love this treat.
Growing blueberries for mass market in NC began in 1936 when a frustrated farmer from Cooperstown, NY bought a thousand acres in the southeastern corner of the state near Wilmington.   Because the land was considered worthless swamp, it went for a dollar an acre.  Blueberry bushes were brought down from the lowlands of New jersey, and just thrived in their new Southern boggy location.  Soon other newcomers and local farmers joined in, and trains were sent up North loaded with NC berries picked during early summer, which supplemented the later crop picked in New Jersey in August.
Now, with global transport, you just might find that some of those blueberries sold in grocery stores during the winter were more than likely grown in Chile from blueberry stock supplied by Finch Nursery in NC.
TIPS FOR HANDLING BLUEBERRIES
- Refrigerate blueberries, covered
- Don't wash until you're ready to use.  Moisture causes them to mold.
- Use or freeze within 10 days
- To keep blueberries from streaking batter, stir blueberries, either fresh or still frozen, into the batter last.
- For pancakes or waffles, pour batter onto griddle, then add blueberries.  They'll look prettier, be more evenly distributed, and easier to flip.
RECIPES
In THE OUTER BANKS COOKBOOK, I've got a dynamite recipe for lemon curd, blueberry tart.  It's quite a pucker-producer, and extremely pretty.  Makes a terrific dessert to show off your culinary skills, but it's not THAT difficult.
Here's that Blueberry Salsa recipe I said I'd do again with pork, but it's good with grilled chicken, or to mix in with chicken salad:
1 cup blueberries, coarsely chopped
2 tablespoons olive oil
3 tablespoons parsley, chopped
1 to 3 tablespoons minced fresh jalapeno, to taste
2 garlic cloves, finely chopped
1/4 cup finely chopped red onion
2 tablespoons lime juice
salt and freshly ground pepper pepper to taste
Stir all ingredients together and let sit for 30 minutes to allow flavors to meld.
Copyrighted, EFW 2008
Posted by Elizabeth Wiegand at 3:13:00 PM No comments: 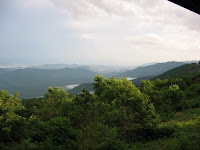 Okay, so what does a scenic mountain view have to do with food and True Love?  Try this view with a tub of Sunset Valley Herbed Chevre from Spinning Spider Creamery in Marshall, NC, along with hummus from the Flying Frog Cafe in Asheville, slices from a pumpkin seed baguette from City Bakery, and a lovely bottle of blended reds from Languedoc that our daughter, Bec, chose to go along with the other treats, and you have the makings of one fine anniversary.  We celebrated our special day with a stay
at the Pisgah Inn on the Blue Ridge Parkway.  We arrived after one helluva thunderstorm, and when the fog lifted, this is what we discovered out the back door.  After our lovely appetizers, we wound up getting lamb chops from the Inn's restaurant and brought them back to our balcony.  The view and ambiance were just too lovely to leave.
Spinning Spider Creamery produces marvelous goat cheeses, from crottins to fresh logs to aged, hard cheeses.  The "Sunset Valley" herb blend is their special blend they hope will become as well-known as Herbes de Provence.  The "Stackhouse", a square loaf with a white rind over a thin layer of organic apple wood ash, was voted the best in a Southern Foodways Alliance competition.  Spinning Spider is a great story, too, of a couple with 3 home-schooled sons who turn their passion into a good business.  I'll tell you about it next week, when I'll talk of other farmstead goat cheeses. 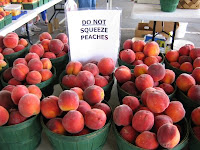 JUICY PEACHES
The best way to eat a peach?  Standing at the kitchen sink so the juice can just run right down your chin and to your elbow.
Feel the soft peach fuzz.  Feel the cool, smooth silkiness of the flesh.  I love the imagery Frances Mayes evokes in her book, UNDER THE TUSCAN SUN, when she drops peaches into boiling water for just a moment, watches the rosy colors intensify, and then slides the skin off  "as easily as taking off a silk slip."
Grilled, or just plain sliced, over vanilla ice cream, has got to be the quintessential, best dessert of the summer.  I've also got a great fresh peach pie recipe with a gingersnap crust featured in my OUTER BANKS COOKBOOK.  Add to a bowl of cereal.  Peel or don't peel.  Make jam, ice cream, cobblers.  You can spend hours in the kitchen making them last past this dizzy, sensuous season of fresh peaches.
Freestone or cling, there are so many varieties grown in the Sandhills, where farmers started planting many orchards in the 1950s as the famed golf courses were built and the retirees settled in.  Another great area is the Brushy Mountains, near Taylorsville.  Drive north from I-40 on HWY 16, and you'll find plenty of places to stop and pick your peaches. There are even peaches at the beaches, esp at Knotts Island, way north in Currituck Sound.  Take the ferry over from the mainland at Currituck, and join in the Peach Festival later this month.
As the sign warns, DO NOT SQUEEZE.  Sniff them, look for a peachy glow with less green on the skin.  At the market, they will feel hard, but allow them to sit on your countertop, away from direct sunlight, and they'll ripen.  Or, place them in a paper bag to hurry up the process.
Here's a recipe for an Old-Fashioned Peach Cobbler that was given to me by my husband's Aunt Margaret.  The batter does a flip flop during the baking, and winds up covering up the fruit.  Serve warm with vanilla ice cream.
OLD- FASHIONED PEACH COBBLER
For the batter:
1/4 cup butter, softened
1/3 cup sugar
1 cup sifted flour
2 teaspoons baking powder
1/4 teaspoon salt
1/2 cup milk
For the fruit topping:
2 1/2 cups sliced peaches (or combo of peaches & blueberries or blackberries)
1/3 cup sugar
1 cup fruit juice (I use orange juice: you might want to try peach or apricot nectar)
1.  Preheat oven to 375 degrees.  Spray or lightly butter one 10 x 5 x 3 inch loaf pan.
2.  In a large bowl, cream together butter and sugar until fluffy.
3.  Sift flour, baking powder, and salt in alternately with milk, and mix just until smooth.  Pour batter into prepared pan.
4.  Place fruit over batter, and sprinkle with 1/3 cup sugar.  Pour fruit juice over top.
5.  Bake for 45 to 50 minutes, until top is browned.
copyrighted 2008 in THE OUTER BANKS COOKBOOK
Posted by Elizabeth Wiegand at 2:20:00 PM No comments: