THE OUTER BANKS COOKBOOK for Nights in Rodanthe

THE OUTER BANKS COOKBOOK might have come in handy during the storm on NIGHTS AT RODANTHE.  In the scene where Diane Lane's character is chugging Jack Daniels and chunking outdated cans from the pantry, she picks up a can of Spam, asking "who eats this?"  Well, if she had a copy of my cookbook, she'd known she could make do with some Spam Stew if nothing else was around to eat after that devastating storm.  Look on page 65, where I tell how a nor-easter blew during filming, cutting the crew off when HWY 12 washed over on Hatteras Island.  The lovely Miss Jeanie Williams (who sadly, recently left us) grew up in Rodanthe, and told me how Spam Stew became a family favorite after the Great Atlantic Hurricane of 1944.
I read that folks on Hatteras were anxious to see the movie, after some of them were extras and worked with and served the crew.  Unfortunately, for its premiere in the Outer Banks, the movie theatre in Avon was closed for the season, so they were to go up to Manteo or Kill Devil Hills.  However, then the recent unnamed nor-easter blew in, flooding roads, and I heard that they were then offered free hotel rooms if they couldn't get back home.
I'm also told that Diane Lane won over the folks in Manteo, where she and co-star Richard Gere stayed during the filming.  She visited a lots of shops and bought, and talked with folks, too.  Gere apparently was unapproachable and aloof.  Too bad.
NIGHTS IN RODANTHE is a typical Nicholas Sparks formula, designed to tug at your heart strings.  But, it has gorgeous scenery of our beloved Outer Banks.  Even the real Bankers, the ponies.  I loved the aerial approach.
Scroll down for the recipe for HATTERAS CLAM CHOWDER,  a very traditional Banks recipe that comes from the Basnight family, served at Basnight's Lone Cedar Restaurant. You might like that better than Spam Stew.
ART IN THE KITCHEN
Food prepared with loving hands, a creative bent, or in a spirit of cooperation is definitely a form of art.   Having a daughter trained in the art of interior design (Kate) has also heightened my awareness of how your surroundings can make such a huge difference, in mood, attitude, and 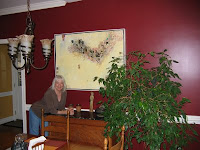 in good feelings. . . .  Having a good friend who is an artist has also increased my awareness of how good art can make you feel good, make you think and ponder and want to be creative, too.
So when we recently painted our kitchen, adding new countertops and appliances, I commissioned a painting by that friend, Lisa Stroud, of 3604 GaStudio in Cary to enliven the kitchen even more.  She arrived with her art in tow this week, and WOW!  There she and it are in the photo at right. It makes me smile each time I see it.  Lisa named it SEARCHING FOR WORDS, and it cleverly has bits and pieces of me and my endeavors collaged into a marvelous texture and abstract vision, evoking an open embrace and lifting of spirit.  I love it!
AT THE MARKETS......
Apples!!!   I'm working on a new recipe for an apple torte, which caramelizes the apples before putting a cake layer on top.  I'd like to tweak it a bit more before sharing it with you. I hope that it will be in a new cookbook featuring farmers and foods from the Blue Ridge.
Tomatoes....do try to put some away right now. Tomato sauce, or even freeze some, whole.
Fall squash, pumpkins....is it really that time of year again?  I love fall, esp. the cooler weather. I'll share some other good recipes next time.
SEAFOOD FESTIVAL, MOREHEAD CITY
I'll be there, signing THE OUTER BANKS COOKBOOK, Sat and Sun afternoons, October 4th and 5th.  This is an annual festival that is always a good time, with lots to taste and good music to listen to.
RECIPE for HATTERAS CLAM CHOWDER.  Handed down five generations of the Basnight family, from Dolly Midgettt, born in 1826 on Hatteras Island.  Note the traditional absence of cream or milk.
100 littleneck clams, cleaned, or 4 cups chopped clams
1 quart (4 cups) water
2 medium onions, medium dice
4 to 5 potatoes, peeled, medium dice (about 5 cups)
1/2 pound smoky bacon, cliced thin
Sea salt and white pepper to taste
1.  Bring the water to boil in a large pot.  Add littleneck clams, and steam, removing clams as they open.   When all clams are opened, strain the cooking water (stock) through cheesecloth and reserve.  Remove clams from shells and set aside.
2.  In the same large pot, render or saute the bacon until it is softly crisp.  Drain on paper towels, and chop into small pieces.
3.  Remove half of bacon fat, then add onions.  Cover and cook over low heat for 5 minutes, or until onions are soft.  Add reserved clam stock and simmer for 15 minutes.
4.  Add potatoes, littleneck clams, sea salt and pepper, and simmer for another 15 minutes.  Serve very warm.
YIELD:  8 servings
copyright  THE OUTER BANKS COOKBOOK, by Elizabeth Wiegand, 2008, Globe Pequot Press.
Posted by Elizabeth Wiegand at 4:43:00 PM No comments: 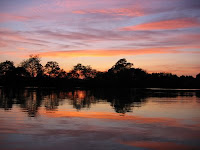 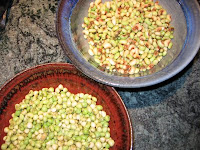 PINK EYES and PINK SKIES - CONTAGIOUS?
Perhaps the joy of chowing down on pink eye peas is contagious.  We certainly converted our Yankee sailing buddy on a recent trip to the Chesapeake.  I had prepped all the food we'd eat aboard his 32-ft Fidelio, and brought the pink eyes, dressed in a light vinaigrette with onions and sweet Hungarian red peppers, to accompany skewers of marinated shrimp kabobs.  Leftover peas were spooned over slices of a ripe, orange heirloom tomato the next evening, and Rob literally licked his plate, then ate any remaining peas in the storage container.
Pink eyes are one type of purple hulled peas, a variety of Southern peas.  Black-eyed peas, the tiny 6-Week (another personal favorite), and crowders are all varieties. We like pink eyes best because of their flavor, size and texture.
Southern peas are also known as "cowpeas," because they were used as fodder for livestock.  Cowpeas originated in Africa, in Niger, and came across the pond with the slaves, who at least got some protein, and a wonderful flavor, from these types of peas.
"Southern Caviar" is yet another endearing term for these delightful late summer harvests.   Shelling peas is a mesmerizing, almost meditative activity, easily done as you watch children playing or TV or just sit and chat with somebody on the porch.  You'll get purple fingers, but isn't that a badge of honor?  I've been freezing some, by just bringing a pot full, barely covered with water, to a boil, then draining, rinsing in cold water and bagging.  Some folks even make Purple Hull Jelly by boiling the hulls, then straining the juice and setting that with pectin.
Folks in Emerson Arkansas hold a Purple Hull Festival every June. How cool is that?
Perhaps this New Year's Day, we'll have pink eyes for our traditional Good Luck dinner. 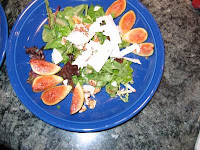 FIGS, FIGS, SEDUCTIVE FIGS
I just can't seem to get enough figs this year.  They've been at the farmers markets these past few weeks, and I feel like I need to eat my fill before their short season is gone.
Drizzled with a very light honey mustard vinaigrette, served with baby lettuce and either a creamy goat cheese or slivers of hardened goat cheese, well, it's divine.
I had a few figs, maybe 8, that had gone soft on me, so I "stewed" them with some sugar and have refrigerated them, and it tastes and feels a lot like "jam."  I'll use a dollop of top of some goat cheese spread on a toasted baguette or cracker for a lovely appetizer soon.
And I think I'll have to plant me a bush.  However, do the deer like them?  They eat everything green in my yard, and what the deer don't get, the squirrels do.
That's why I love the farmers market.  Me, a farmer's daughter without a garden.
Posted by Elizabeth Wiegand at 3:46:00 PM No comments: