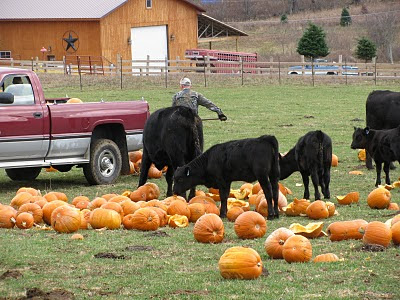 "They really love 'em," the farmer yelled over to me as he flung yet another pumpkin from his truck with a shovel. These Halloween rejects were quite the treat for these pasture-raised mommas and their calves.
At this time of year, Ashe County roads are humming with huge trucks hauling Christmas trees, Fraser firs, cut during the cold snap of November. Farmers markets are full of beautiful round cabbage heads and winter squash, as well as the start of Christmas decorations.
At Zydeco Moon Farm & Cabins, we were treated to some of Sally's zesty tender greens she's growing in a new hoop house. Her CSA patrons will enjoy more greens all winter long with a clever new growing system that re-purposes gutters. Drainage holes were drilled in the bottoms and then they were filled with soil. What a great growing environment in the greenhouse during the winter!
Ashe Co. Church Marquee. . . . We don't need more to be grateful for; we need to be more grateful. Happy Thanksgiving, y'all. 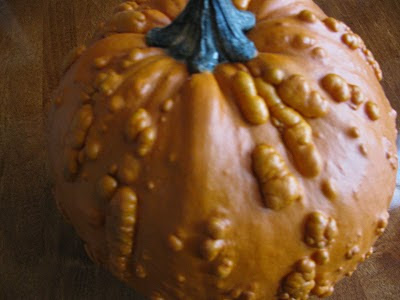 PUMPKIN IN THE OVEN........
So what if it's full of warts and getting old......Like me, it's still full of flavor and usefulness!
De-seeded, my Halloween pumpkin will be roasted, and I'll use the puree for either a soup or a pie.
My friend from Chapel Hill, Nancie McDermott, author of SOUTHERN PIES and SOUTHERN CAKES and several other cookbooks, writes that she prefers to use canned pumpkin in her pies, for the fresh pumpkin can be rather watery when cooked down. Purists like Barbara Kingsolver, in ANIMALS, VEGETABLES & MIRACLES, recommends cooking with fresh pumpkin.
Frankly, I think whatever you have time for is just dandy. If the pumpkin's flesh is too watery when roasted, it will be perfect for soup. So keep some cans of pumpkin puree to use with pies or muffins in your pantry!
Ditto for pie crusts. Nancie and I shared a secret at a recent Pie Contest where she was signing books at Quail Ridge Books.
We keep a stash of pie crusts in the fridge or the freezer. Not the homemade kind. The boxed, rolled up pie pastry for me, the crusts in the tins for her.
If time is limited, wouldn't we rather have pie, even if we don't use not made-from-scratch pastry?
Enjoy your Thanksgiving gatherings of loved ones and eating! 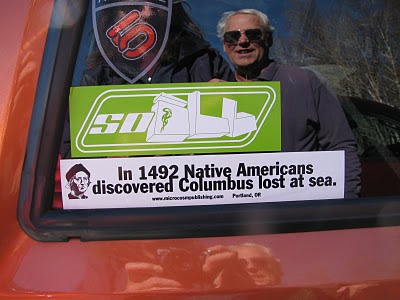 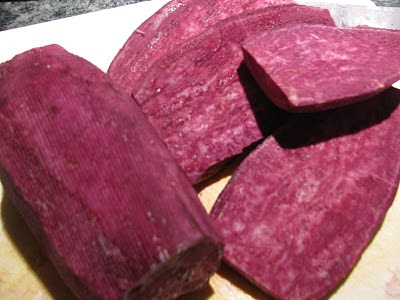 I like the color purple.
Folks who know the Carolina Foodie often see her wearing purple.
So when I saw PURPLE SWEET POTATOES at the State Farmers Market in Raleigh, I had to have them. I wanted to EAT PURPLE!
I had heard that NCSU had been working in their micro-propagation program with the Saura Pride Co in Stokes County, trying to rid a purple sweet potato of any possible viruses. The fact that they were now for sale meant success.
STOKES PURPLE
That's its official name, the Stokes Purple, and it has an interesting story.
After retiring from a state job, Mike Sizemore of Walnut Cove decided to farm some land he owned. Another farmer who wanted to retire approached him about selling his equipment and sweet potato business. As an added bonus, the elderly farmer threw in some slips of a purple sweet potato, an Asian variety, that he thought had potential. Sizemore grew some and was impressed. So he took it to NCSU to get a "clean" plant, one free of viruses that often ravage a crop.
Nearby, Hanging Rock State Park hovers over fertile fields that are perfect for growing potatoes. They don't like being wet, so the soil needs to drain well. But it can't be too sandy, or else the nutrients won't be there.
Now, other former tobacco farmers in Stokes County have a replacement crop, and can use most of the same farming equipment as they did for planting and growing tobacco. They sell them for cash to Saura Pride Company, (named for the Saura, the Native Americans who once inhabited the fertile soil of this northwestern Piedmont area), which distributes them to markets.
You'll find sweet potatoes overflowing market bins now. After being dug up in the fall, they spend several days "curing" at a steady warm temperature inside a warehouse. In the old days, folks laid them to "cure" in the sun, before packing them into root cellars or even "potato hills," holes dug in the earth where the potatoes were mounded in a heap, then covered with soil. Cured sweet potatoes will store much better than those in their "green" state. 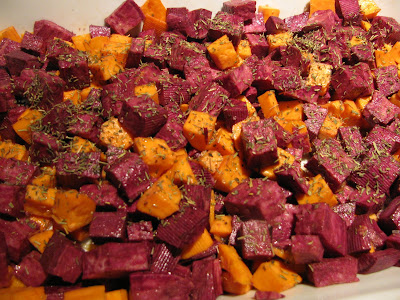 PURPLE PEOPLE EATER, oops, maybe PURPLE EATING PEOPLE?
Remember that catchy, bouncy song by Sheb Wooley that made the charts back in 1958, also sung by Jimmy Buffet? It's been stuck in my head ever since I sliced into that Stokes Purple.
"I said Mr Purple People Eater, what's your line?
He said eating purple people, and it sure is fine
But that's not the reason that I came to land
I wanna get a job in a rock 'n roll band."
PURPLE IS HEALTHIER?
Maybe we should be eating more purple.
Turns out that the chemical responsible for the purple color, anthocyanin, can reduce cardiovascular disease and improve vision. The purple variety has more antioxidants, with 8.5 times more Vitamin E than in an orange sweet potato, and more Vitamin C. And those antioxidants get stronger when the sweet potato is cooked. 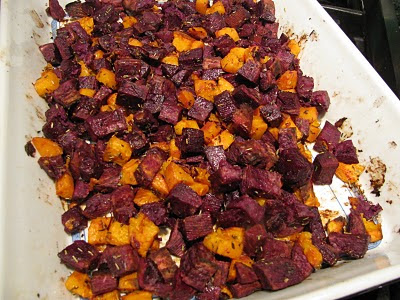 THE COLOR PURPLE
Under the peel, the Stokes Purple was still purple. The cutting board turned purple. My hands were purple. Under my nails, it was purple.
I diced it, along with another new NC variety, the bright orange Hatteras, then stirred in olive oil until they glistened, sprinkled it with sea salt and herbes de Provence, and set it into a 375 oven for about 30 minutes until barely tender.
And guess what?
The Stokes Purple was still purple after being cooked.
Now, that sure is fine. And it tasted better than fine, too. I love sweet potatoes!
Note: our teeth did NOT turn purple. With a bit of scrubbing and filing, the stains came off my hands and nails.
Posted by Elizabeth Wiegand at 5:00:00 PM 2 comments: 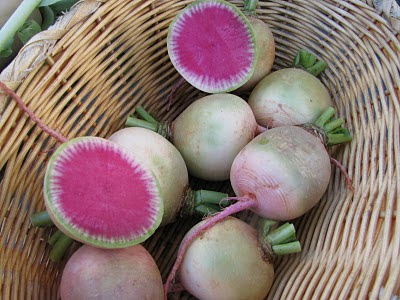 WHOA!!! I screeched to a halt in front of Edible Earthscape's booth at the North Hills Farmers Market.
"What is that? It's gorgeous!" I cried.
"A Watermelon Radish," Haruka Oatis replied.
What does it taste like? "A radish," she said with a laugh.
I took one home, for fifty cents, and set it on the counter.
"What's that ugly thing?" I was asked. "Just wait," I said with smile. 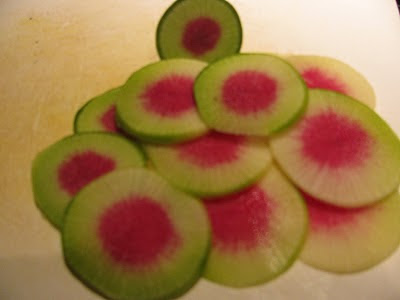 I peeled away the thin, outer skin, then cut the radish into thin slices.
"Wow!" was the reaction. "That's gorgeous."
Toasted walnuts, some fresh mizuna, also from Haruka and Jason's farm, and freshly grated Parmigana cheese were added to the Watermelon Radish for a salad that was as delightful to the eye as to our tastebuds.
I'm going to try and find some seeds so that I, too, can plant this edible beauty. Anyone have a resource for us? Please comment! 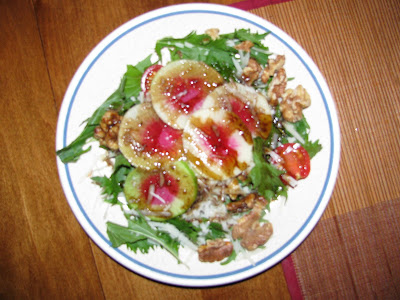 A SIMPLE VINAIGRETTE
Last post, I told you about Theros Olive Oil and Virginia Vinegar Works.
I should have told you how to make a vinaigrette using them.
Vinaigrettes are so easy to make and so very much cheaper - and tastier - than bottled dressings.
Here's the classic RECIPE:
One part vinegar (or lemon juice or combo)
salt & pepper
squirt of Dijon mustard
MIX THOROUGHLY (I usually opt for a recycled jelly jar, and just shake the hell out of it)
Add THREE or FOUR parts oil (I prefer extra virgin olive oil for most)
MIX THOROUGHLY
Options: minced fresh herbs added before the oil, and/or minced garlic
If you should choose to use a small bowl, use your whisk to mix. With small bowls like that, you can create a neat whirlwind by rubbing the handle of the whisk back and forth between your palms. Try it!
Posted by Elizabeth Wiegand at 2:48:00 PM 1 comment: