During the Holidays, many of us are treated to performances of Swan Lake, the classic ballet, followed perhaps by champagne and oysters on the half-shell.

Down East, you can have a more down-home winter's treat of Swan Lake and oysters, too.  I prefer nature's version at the Mattamuskeet National Wildlife Refuge, where at least one hundred thousand and more tundra swans congregate from December to mid-February to put on quite a show.  You'll also find them at the nearby Pungo Lake and at the Pea Island refuge just over the Oregon Inlet bridge.

These gorgeous and huge beauties fly in from their summer holidays in Alaska, and spend cold, wintry months in what they must consider hog heaven, feeding in the shallow waters of these lakes that might have been formed by meteorites.  They're noisy, honking constantly when not grooming or dunking their heads to eat.   Canadian geese and a variety of ducks also spend the winter here.

The swans also like to feed in the vast fields of winter cover crops sown in the black, fertile soil of the flatlands of NC's Down East.  So, many farmers consider them royal pests who eat the grains they sow.

This is also where the US Navy wanted to put their Outlying Landing Field so that jet pilots could practice their   stop and goes.  I thought it fitting that during one of the demo flights to show the efficacy of this area, a Navy pilot had to abort a flight because of contact with these swans and Canadian geese in flight.  Thank heavens, the plan itself has been aborted. 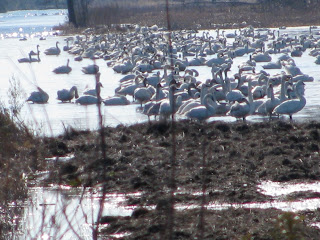 At sunset, the swans honk and start walking on the water for take-off, flapping their wings and finally taking flight, finding their night-time resting spots along the Pamlico Sound and other spots out of the wind.

After hiking around to find the best viewing of the swans on the water, we had built up an appetite.  And that's a good thing, as Martha loves to say, for we were also in hog heaven, in oyster country.  So at the dimming of the day, we continued our trek east on HWY 264, past humongous black fields dotted with escaped tufts of white cotton, to the tiny village of Engelhard. 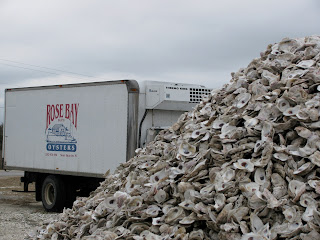 "Stumpy Point is the best source of oysters in the Pamlico Sound, right?"  I asked the fellow steaming a peck of fresh oysters at the Oyster Bar at Martell's Feed House.

"That's what they like to say," he said, an earnest look on his face.  "We claim these here are the best, from right out there," he said, pointing over his shoulder.

"Rose Bay?" I asked, having stopped at the oyster processing plant on HWY 264 on our way to the lake.  Rose Bay, right next to salt marsh on the sound's edge, used to be famous for their salty, tasty oysters they harvested from the Pamlico Sound.  And just a few decades ago, they had competition from many other oyster houses that lined this section of our coast.  But then, storms and pollution, in the form of farm run-offs and fresh water from the huge drainage canals and ditches near those lakes and the pocosin swamps, and over-harvesting, all worked together to decimate the oyster industry along the Pamlico Sound.

Amends have been made, with more conscious farming techniques, and the building up of reefs and oyster farms. During the last couple of years, oysters have make a comeback in NC waters.  Hallelujah!  Rose Bay Oysters are back.

"So where is out there?" I asked when my shucker shook his head to Rose Bay.  Gull Rock, a hump in the sound, sorta near the route the ferry takes from Swan Quarter over to Ocracoke, he explained.  Just over there, across those fields, he said, pointing.  I reckon you can call THAT "local"!

"There was a build up of oyster shells where folks used to dump the shells, you know, to make it so there were more oysters."  Over the years, hurricanes and nor'easters swept the heaps of shells away, he explained.  But the water bottom had been recently leased, the oyster reef re-built, and oysters were making their comeback in the area.


He brought a huge peck of steamed oysters  to the counter where we were sitting, and began to shuck them, ladling them gently into our shallow dish.  We dipped those tender babies in melted butter and warm cocktail sauce, and popped them in our mouths.  A faint taste of salt, just right. OMG.  They were firm, like really, really fresh oysters should be. There was that oyster taste, the best I had experienced.  Those Gull Rocks were absolutely rocking.

"Yeh," he said with a trace of that Outer Banks Elizabethan accent, "these oysters were in the water this morning,"  and shook his head.  He talked about how the 4 a.m. start to his day on the water collecting oysters got to be too much for him, so he  became a lineman for the power company instead.  And he no longers eats oysters. Because?  "I just got sick of oysters," he said, shaking his head.  "Too many in my life."

NOT ME!  Bring on another peck, we said, and proceeded to slurp every single one of them down.  How often do we get day-old, fresh oysters plucked from the waters of NC?  Now that was a holiday treat.

The Oyster Bar at Martell's Feed House in Englehard is open Tues through Sun during bear and duck hunting seasons. . . . meaning, the cold winter months when oysters are really, really good.  Go get a peck!

A GREAT NEW YEAR'S RECIPE -  Try to score some fresh NC oysters of your own, and use this simple recipe to enjoy them.  No steaming required!

ANGELS ON HORSEBACK
This appetizer is so named because of how the oyster curls against the bacon when cooked.  A traditional savory from England, where ”rashers” wrapped around oysters are served on toast points, it’s also known as Oysters en Brochette in New Orleans.   Since oysters are plentiful in the sounds surrounding the Outer Banks, it seems a natural tribute to the Winged Horses scattered throughout these sand banks.

Posted by Elizabeth Wiegand at 7:22:00 PM No comments: