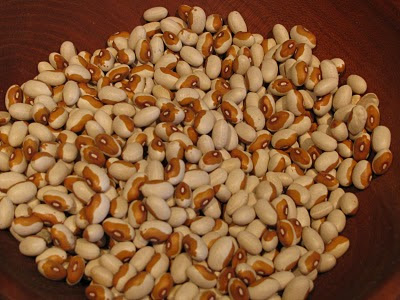 GOLDEN EYES...
James Bond's Golden Eyes came to mind the first time I laid eyes on these peas.
"What do you call these?" I asked the older lady manning the farm stand, one of many on HWY 64 between Chimney Rock and Hendersonville, back in October.
She just stared at me, like I just didn't have any sense at all in my head.
Finally, she cocked her head and pointed to the sign below the basket that read YELLOW-EYED PEAS.
"Oh. So how do you cook them?" I asked, undaunted.
She kept staring, then shook her head. "Honey, you do them just like you do black-eyed peas," she said with disgust and turned away.
A SOUTHERN TRADITION
In most regions of the South, peas and beans were dried for winter use. Often times, this staple was all folks had to fill and warm their stomach on cold, dreary days, such as we've been having lately. Traditionally, they were cooked with a bit of fatback, or if they were lucky, a ham hock.
Both black- and yellow-eyed peas are members of the cow pea family, brought here by the enslaved from Africa, and developed by farmers for feeding livestock. Hence the name. 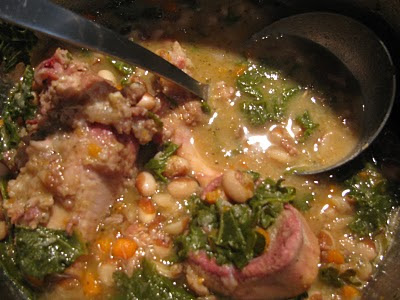 COMFORT FOOD
Most folks have Hoppin' John or some such on New Year's Day, with the black-eyed peas representing coins, served with greens of some sort, with hopes that digesting such would produce a good flow of money, green bills or change.
My yellow-eyed peas might bring me GOLD, I hoped, as I stirred the pot filled with the hock of a ham we had devoured during the holidays. I added some kale during the last 15 minutes of cooking for good measure, too, thinking for sure some greenbacks might also come my way.
We devoured the whole pot in one sitting.
With the nasty cold weather we've had lately, I've been thinking about that pot of peas. Truly comfort food, warm and filling, the dish is quite simple and no-nonsense. Just like that old lady. Yet, I'd place that mess of peas right up there on my list of great foods, one that brought me and mine much pleasure. That in itself is good fortune this year.
Before cooking, dried peas and beans need to be either soaked in water overnight, or covered with water, brought to a boil, then soaked from two to four hours. I'll put my leftover stash of dried yellow-eyes in water before I head up to bed.
RECIPE That old lady at the farm stand left me wondering about the best way to use my novelty peas. Fortunately, New Year's Day dictated that I needed to produce something to bring me "luck and money". Forgive the generalities of this recipe, but I imagine it's how my grandmother would have told me to do this!
If you'd prefer, you can do a healthier version of this minus the ham or bones.
about 2 cups dried peas
one onion, chopped
hambones or a bit of chopped country ham
small bundle of kale
salt and pepper to taste
Place the peas in a bowl or pot and cover with about two inches of water. Let sit overnight. Or, if you're in a gall-durned hurry, put them in a pot and cover with water, bring it to a boil, turn the heat off and let them sit for a couple of hours.
Add the onion, and the ham or bones. Bring to a slow boil, then turn the heat down and simmer for about an hour or so, until the peas are tender.
Coarsely chop the kale, and stir into the pot. Continue to cook until the kale is tender enough for your taste, probably about 15 minutes.
Taste and season with salt and pepper. (Be careful with salt, for the ham may have added plenty.)
Posted by Elizabeth Wiegand at 4:41:00 PM 2 comments: 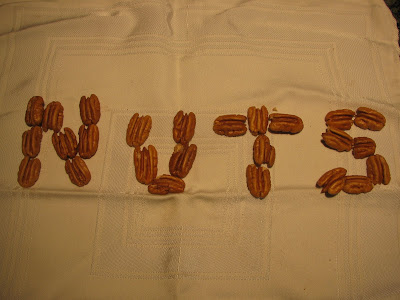 PECANS
It's pecan time.
The season for pecans gears up just before the holidays, allowing cooks to go nuts making all sorts of marvelous holiday treats, even into the winter. Pecans have been in the markets for the last couple of months, with one gallon bags fetching at least $20.
And believe me, that's worth it.
Dan Finch, owner of Finch Blueberry Nursery in Bailey, NC, also grows pecans for his family. And I am now family, since he married my sister a few years ago. When they were first courting, he brought me several of those gallon bags full of beautiful, already-shelled pecan halves, ready for cooking, sorta like a peace-offering to a future in-law.
Since then, he's shared big boxes of pecans that have been dried, boiled, then cracked, ready for ME to pick out the nuts from among the shell fragments. Didn't appreciate how spoiled I was the first time! 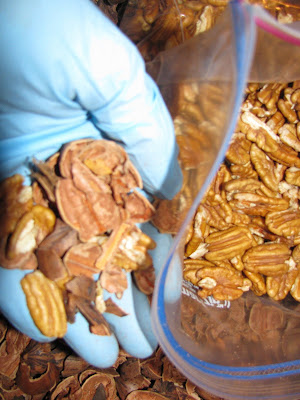 A LABOR OF LOVE
I love, love, love getting these big boxes of pecans. However, it takes me several evenings going through them to pluck the meat from the shells. It's tedious work. And believe me, I am NOT complaining. I tend to fill my mouth as I fill my bags with the pecan pieces, sorta OCD-like in raking my fingers through the fractured, brown shells.
Note that I wear rubber gloves. The tannin in the shells will stain your fingers but fast.
And I now have a year's worth of pecans to make pies, add to salads, cakes and other cooking ventures.
So that twenty bucks or more for a bag of pecans at the market seems quite fair to me. And that's not even taking into account the effort it takes to grow and then maintain the trees. Or to collect the nuts in the first place. Dan tells me he shakes the trees with a front hoe or whatever attached to his tractor, and the nuts fall onto a drop cloth laid on the ground. Then they've got to dry out for a while, then he takes them to a facility where they quickly boil the shells to soften them, then cracks and shakes the majority of the outside shell from the meat.
Anything considered a treasure takes time and labor to produce. And pecans are definitely a Southern treasure. 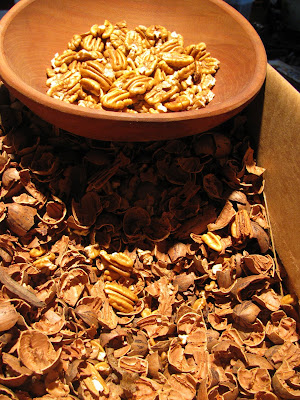 AN ALL-AMERICAN NUT
Pecans are native trees, found in the Southern states. Texas and Louisiana are big producers, as is North Carolina.
"Pee-can" or "puh' kahn"? Native Americans called them "pecaunes" which translates as "a nut requiring a stone to crack." Ha!
There's an art to cracking them gently enough to open them and pull out the two complete, pretty halves. My dad could put two together in his big hands and crack them open.
Thomas Jefferson loved pecans, and had several planted at Monticello. He knew that you need at least two varieties for cross-pollination. Today, you'll find most pecans planted in a "grove."
And, they're healthy for you! Pure protein. Full of omega-6. Antioxidants. Can lower cholesterol.
Guess that mess of pecans I've been eating as I sort through my boxes is doing wonders for my health, as well as my soul.
RECYCLE THE SHELLS
I could place the shells in my compost bin. Better yet, I'll spread them over my herb garden, and let the birds and squirrels pick out the little pieces of nut left, digging and hiding them in the soil. It should be a good mulch. Any one with a negative experience doing this? Please let me know.
RECIPE - CHOCOLATE PECAN PIE
We recently helped our youngest daughter move to Pennsylvania. I picked out enough pecans to make her favorite, a chocolate pecan pie, to take with us. We christened her new house and eased our aching backs with big ol' slices of the fudgy sweet.
Enjoy this recipe that appeared in my first cookbook, THE OUTER BANKS COOKBOOK.
1 cup corn syrup (light or dark)
3/4 cup sugar
6 tablespoons butter
4 to 6 ounces bittersweet chocolate, chopped
3 large eggs
1/4 teaspoon salt
2 1/2 cups raw pecans
1 unbaked 9-inch pie crust
1. Preheat oven to 350 degrees.
2. Place corn syrup and sugar in small saucepan. Stir together, then bring to a boil without stirring further. Remove from heat, and add butter and chocolate, and stir until both are melted and mixture is smooth.
3. In a large mixing bowl, whisk eggs until frothy then add salt. Slowly whisk chocolate mixture into eggs,and stir until well blended. Add pecans, and stir.
4. Pour mixture into unbaked pie shell, smoothing pecans into filling.
5. Bake at 350 degrees for 30 to 45 minutes, or until filling is somewhat set in the center.
Posted by Elizabeth Wiegand at 4:09:00 PM No comments: