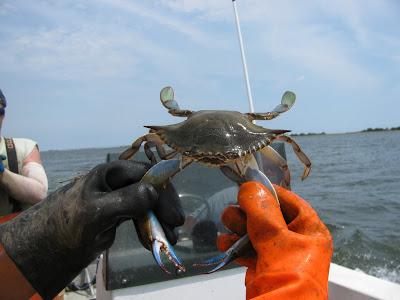 A big jimmy, a prime crab!
One cool day last week down in the Outer Banks, we headed to the 'cheese - that's Wanchese - to "pull" Margaret's crab pots. 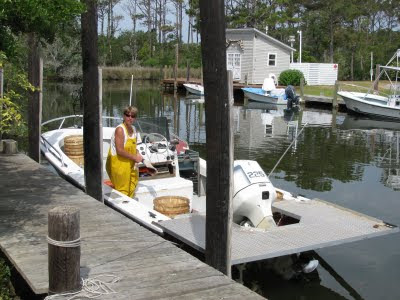 Vicki Basnight got the cranky old engine started, then pulled away from the dock at the family's compound on Roanoke Island, winding her way through the marsh's water trails, under bridges and to the back of one of the oldest fishing villages on the East Coast. Someone unfamiliar with those waters would have been aground in an instant, but Vicki has had her own boat since the age of 10.
Margaret and Vicki share the chore of pulling each other's pots. Margaret, an ex-restaurantuer and ex-accountant, now fishes for a living. Next time out, it'll be for Vicki's pots, the catch going straight to the kitchen at her family's restaurant, Basnight's Lone Cedar. Mark, who also works at the restaurant, is the muscle man for this trip 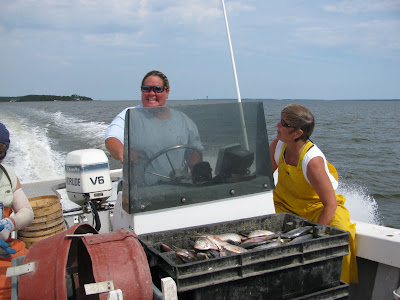 It was hard to believe, as I leaned back onto the railing, enjoying the sun on this glorious clear day - the smoke from the peat-fueled wildfires Down East were finally blowing the other way - that this was a working trip on the water. 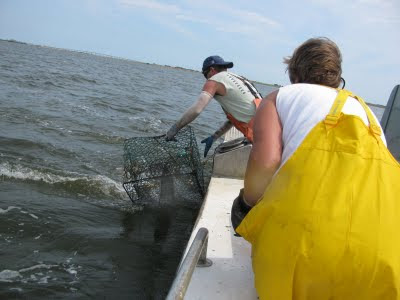 Everybody's got a specific job. Vicki maneuvers the boat toward the float marking their pot. Each float is distinctive, like a signature, so that crabbers know whose is whose. In a choreographed moved much like a dance, Mark hooks the line near the float, slips it around the winch, flips the switch and waits for the pot to surface. Then he hauls it over to the sorting table and turns it upside down and shakes out the crabs. It takes a shake or two, for those crabs know they don't want to leave the safety of the pot where they've fed and possibly gotten it on with the chandler's wife. 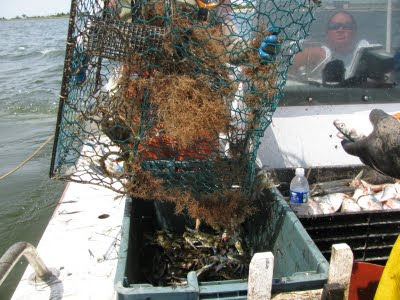 Then with gloved hands, Margaret measures each crab against handy measuring sticks in the catch basin, checking to see that it's long enough from shoulder to shoulder or else it gets thrown back in. The crab then gets tossed into a bushel basket sorted according to size. 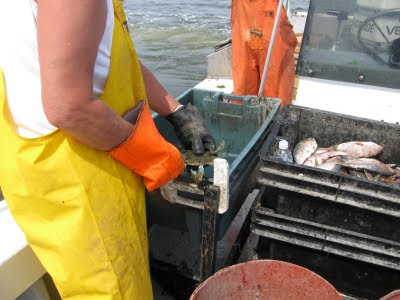 "Country," who works nights as a probation officer, has the worst job, picking out three thawed bait fish, today stinky menhaden, to stuff into the bait trap. Then Mark picks the pot back up, rotates it so that the bait trap faces down, then stuffs in back in the water once Vicki has the boat in place. 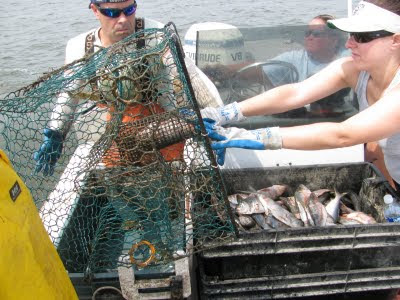 My job? To stay out of the way, and then entertain the crew, along with my friend Della. So we tell jokes, and I ask a lot of questions.
I'll tell you one thing I learned: I will never, ever, complain about the cost of seafood, like crabmeat, ever, ever again. The work involved is tremendous, dirty and needing lots of muscle, and the cost of a boat, dock, and fuel are tremendous as well. Then someone has to pick the crabmeat out of its shell and pack it into pound cups, another tedious job that used to be done by older women in the small fishing villages lining our coast, like Oriental or Ocracoke. Today it's mostly migrant workers or Latinos. 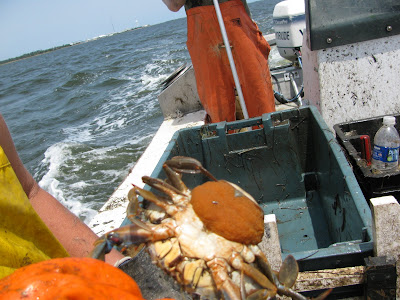 I learned that females have to be a certain length to be legal. Those with bright orange roe sacks - some huge - are thrown back in so that they can make little crab babies.
The big boys - the huge jimmies - are the once most prized and bring the most for the crabbers. Margaret expected them to fetch about $75 per bushel, and the other smaller sizes to bring in $40 and $30 each.
I had to bail on them at the Manteo town dock to go to my book signing at Manteo Bestsellers (after a shower!). After they dropped me off, they found their "honey spot" and wound up with 11 bushels total. Margaret was pleased with her sale later over at Wanchese.
Margaret saved a bushel to take up to her sister's in Greensboro for the weekend. She steamed them on her back porch in South Nags Head to keep the smell and cooking mess at bay. I bet they spread newspapers on a big table and spent a pleasant evening with beer and conversation while cracking crab.
You can do the same. Just follow the RECIPE below!
CRAB BOIL
Boil up a big pot of live crabs, spread them on newspapers and provide pliers, lobster crackers, small hammers, and plenty of towels to extract the marvelous meat from the bellies and claws. A meal will take hours and dozens of crabs, so make sure you’ve got some good conversations going. And ice cold beer. And some paper towels!
Big pot 2/3 full of hot water
3 Tablespoons Old Bay Seasoning
1 Tablespoon crushed red pepper
12 live crabs
melted butter
cocktail sauce
1. Bring water to boil. Add Old Bay and crushed red pepper. Stir. Add crabs, reduce heat to medium. Cover and boil for five minutes. Drain crabs into sink or pluck from water and place in extra large bowl.
2. On the table, have lots of small knives, forks, pliers, lobster crackers or small hammers and a roll of paper towels. Have small bowls of melted butter and cocktail sauce within easy reach of each person.
3. Place crabs directly on the newspaper. Let guests have at it, let conversations roll, and hope no screaming babies demand attention, for you’ll have to wash up first.
Serves 4 to 6
Posted by Elizabeth Wiegand at 5:08:00 PM 1 comment: