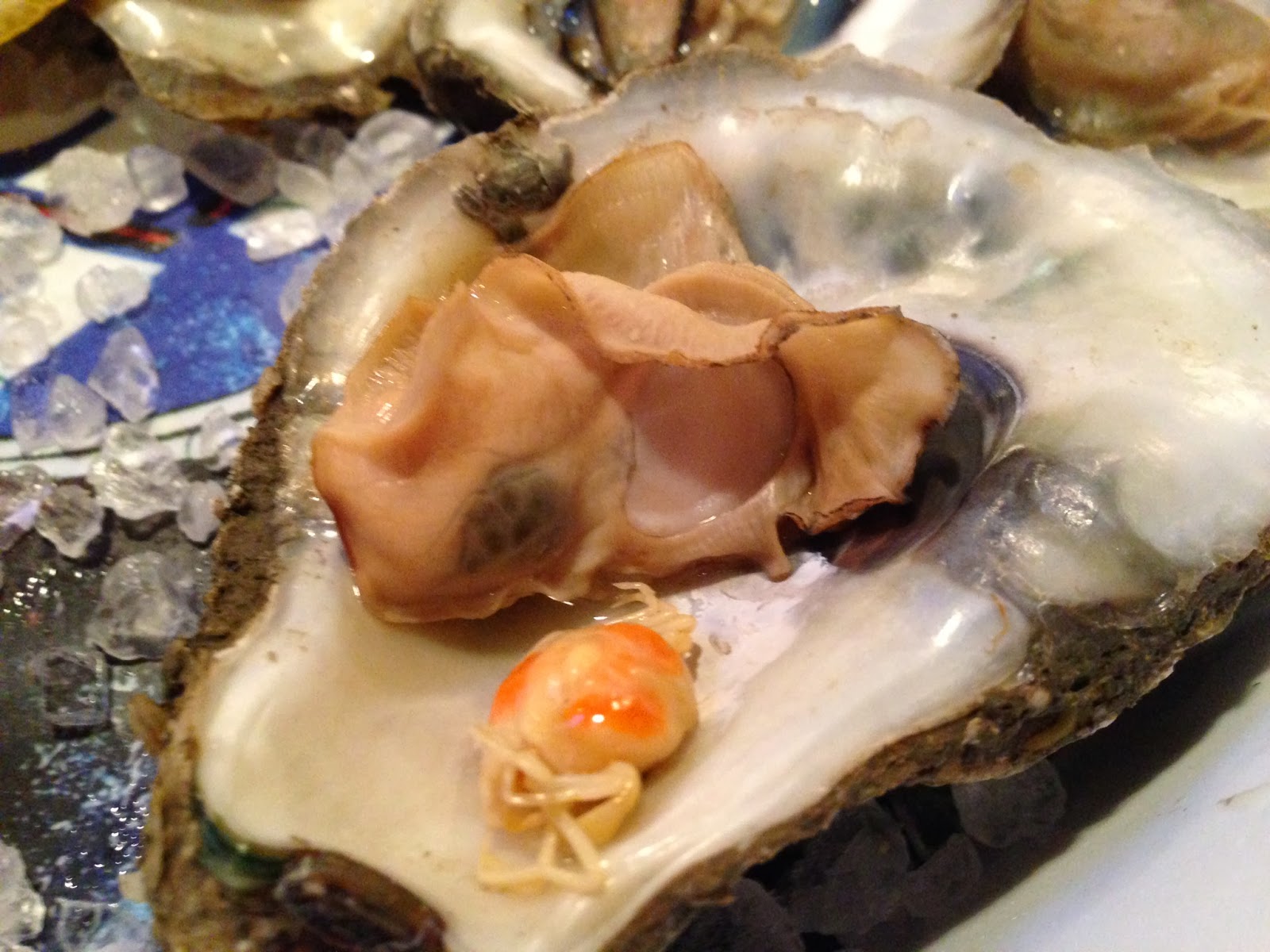 LUCKY ME!   THERE'S A PEA CRAB IN MY OYSTER!

A pea crab, a bit bigger than a green pea and coral in color, sat right on top of the steamed oyster on its half shell.  It was a  little lagniappe, and I was thrilled.  The chef at Old Salt Oyster Bar in Columbia, NC. knew what he was doing when he returned this tasty morsel to its cooked
partner.
Pea crabs are considered a real coastal delicacy,  bringing good luck and fortunes when eaten raw.  Only the females infiltrate oysters, as its host oyster filtrates up to 50 gallons of water a day, and they eat what the oysters eat.  After their babies hatch and become too numerous, the oyster will sorta spit them out.
I've only eaten pea crabs when their oyster has been steamed, but my friend Della Basnight, a native Outer Banker, loves them raw, when they are still wiggling, tickling your mouth as much as the raw oyster soothes.
On a dreary, cold, and sunless day, we made our annual pilgrimage to Lake Mattamuskeet to see the beautiful snowy white tundra swans that migrate in the hundreds of thousands to feed in the shallow waters of this bay lake.
Our spirits were a bit down, for we had only seen a dozen or so in and around the lake.  "Head up to Engelhard, where they were picking the fields clean this morning," the ranger advised.
Which is where we found them in the hundreds, far from the road, not up close and personal.
And on top of that, Martelle's Feed House in Engelhard was not open until 5:30.  On past trips, we've bellied up to their bar for fresh steamed oysters straight out of the Pamlico Sound, a hoot and a holler from the road. 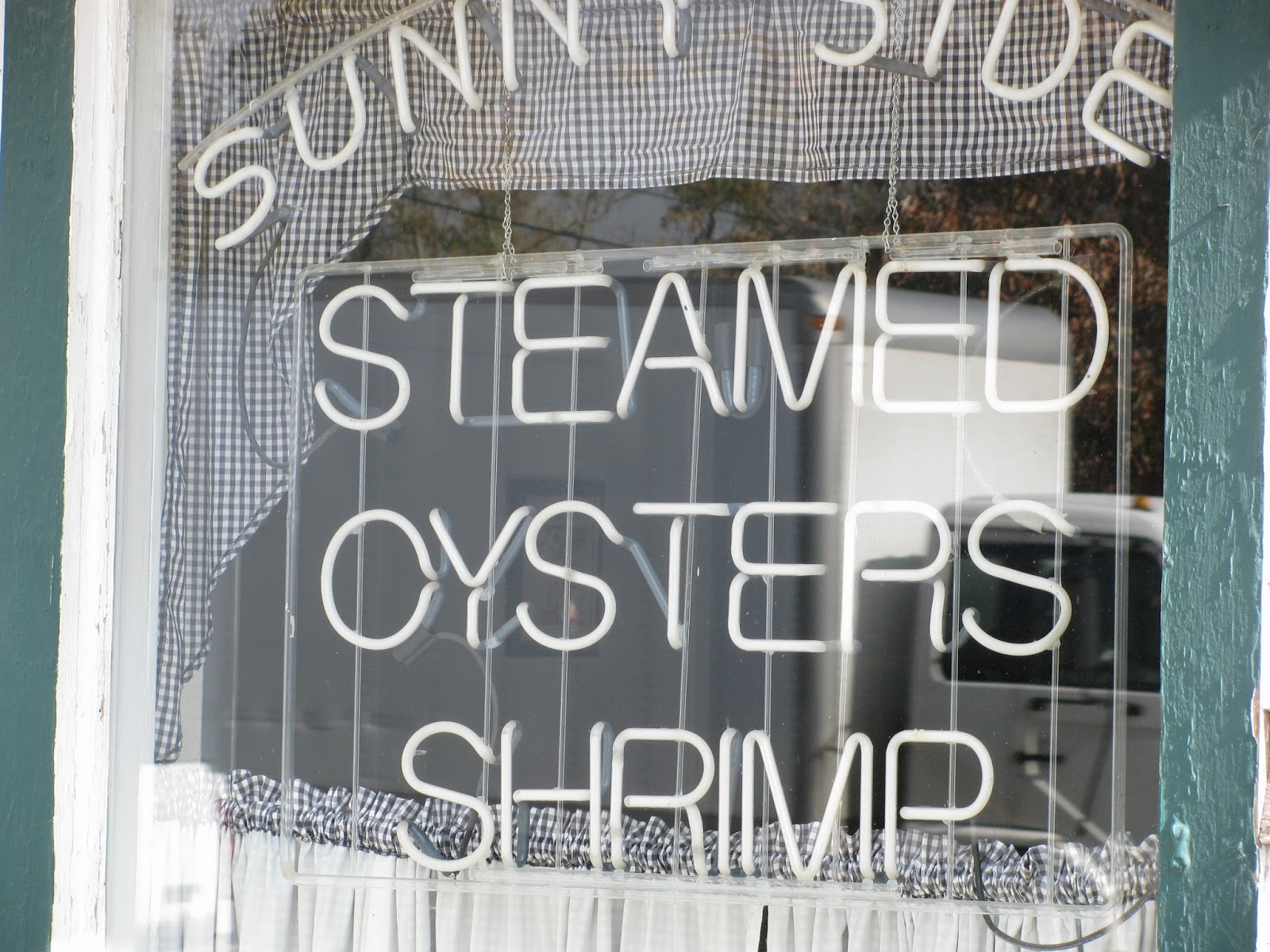 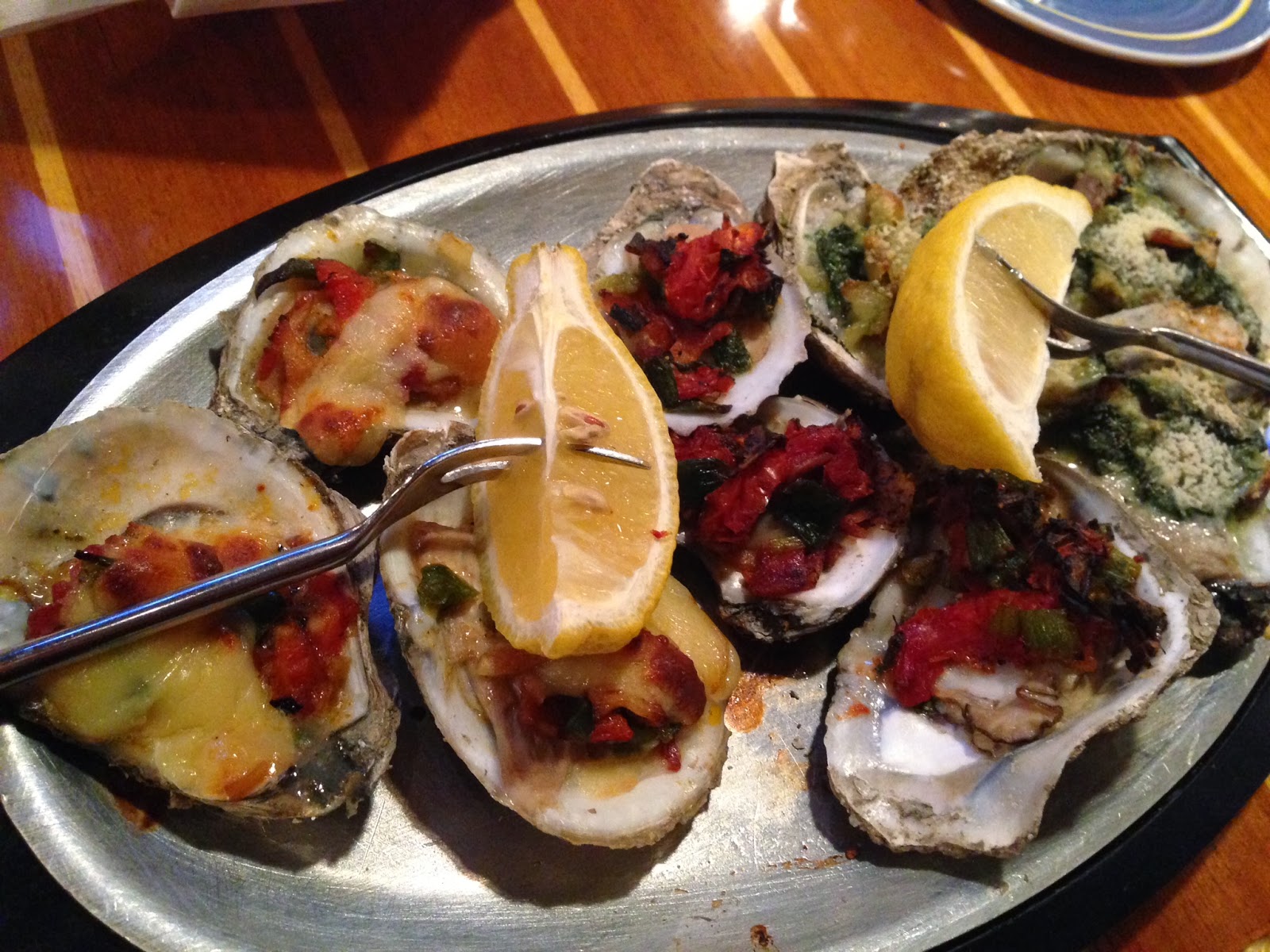 So we plotted out a side trip on country roads, north to Williamston, where another favorite, Sunnyside Oyster Bar, should open just as we rolled into town.
Side trips lead to side trips. . . . so when we hit Columbia on our way, we decided to get off the main drag, US HWY 64, and explore the cute little downtown area.  Which led us to discover the Old Salt Oyster Bar, a re-furbished old five & dime that serves local oysters from just down the road from whence we came, at Swan Quarter (where a ferry runs to Ocracoke Island).
We devoured a plate of Oysters Rockerfeller and two other prepped oysters for our first go-round.  Then we shared a half peck of steamed bivalves, a few with pea crabs.  Then ordered another half peck, counting out shells to even our scores.  Our spirits were remarkably improved!

This is the season, during the colder "R" months, to enjoy eating this bivalve.  Make sure you scroll down to find several NC Oyster Festivals where you can fill your belly, dance and drink beer.

NC has the second largest estuary system in the US, with a mix of salt water that flows through the inlets from the ocean and fresh water from our rivers, a perfect environment for the oyster.
Unlike other shellfish, oysters never move.  And they have a very unexciting sex life.  During the spring, when the water temp reaches 68 degrees, male oysters release sperm, and the females their eggs, and by chance, those two meet up while floating in the water.  Once the little ones, the spats, get large enough after floating around in the water, they sink to the bottom, and attach themselves to something, preferably another oyster shell. 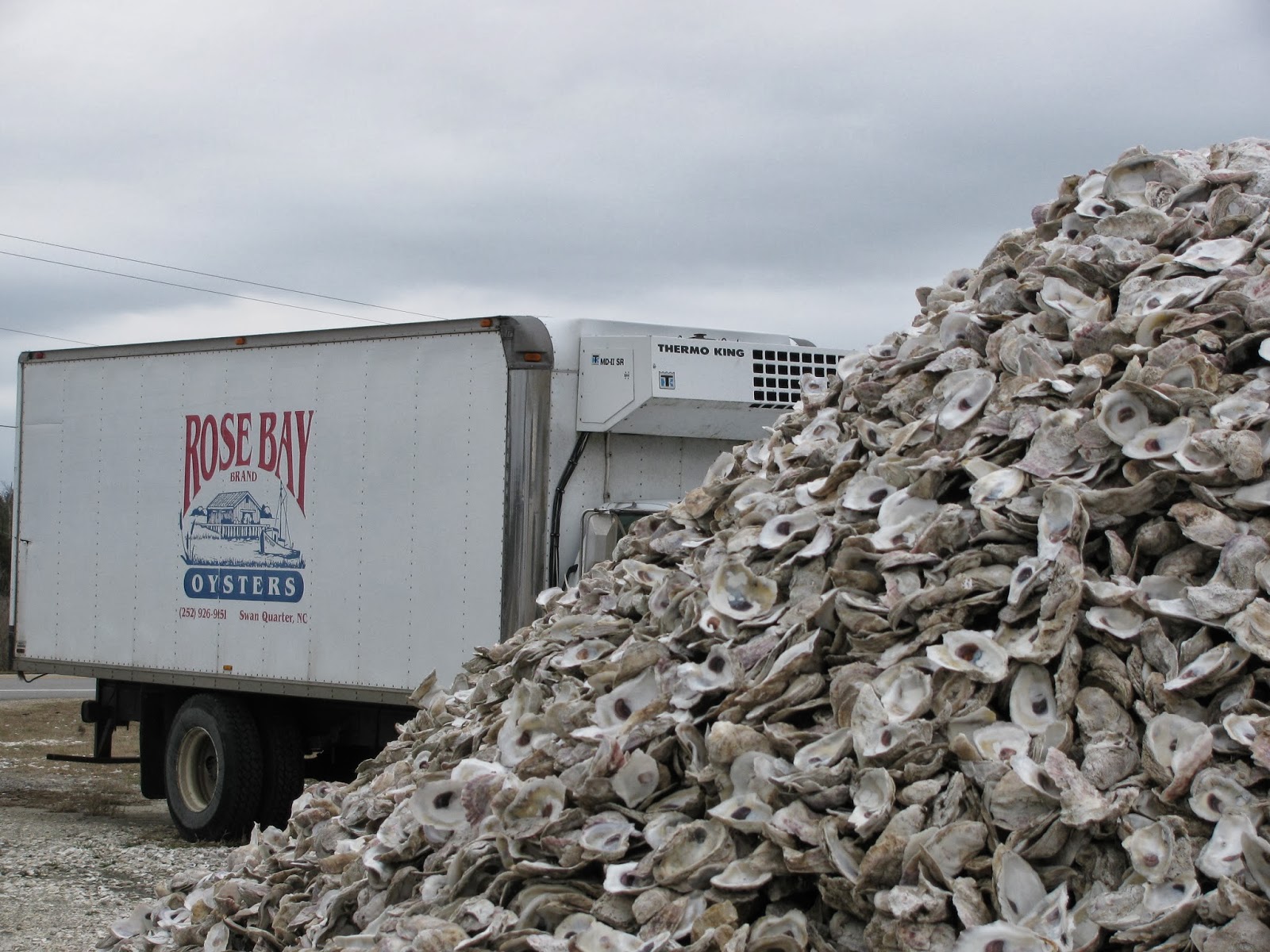 Oysters filter a huge amount of water, extracting the nutrients they need, and leaving the water in a  much better state - cleaner, more pure.  And when oysters clump together like that, they also provide a "sill" that stabilizes the banks of our waterways.   Those oyster reefs also provide habitat for our fish.  So, you want a lot of oyster reefs in the sounds.  Never again will I complain about having to avoid their razor sharp edges!
Wild caught Eastern oysters have made a bit of a comeback in NC these last few years.  Used to be, way back in the early 1900s, that tons of oysters were dredged from NC's sounds.  But they were pulled at a rate that was not sustainable to the oyster population, even if the Dermo parasite had not also hit at the same time.  The oyster business was devastated.  In 1900, about 800,000 bushels were harvested; in 1994, only 34,000.  Gradually, with run-off pollution more in check, and with oyster reef restoration efforts, especially, oysters became a bit more plentiful in our coastal waters.   About half of the original bounty, 440,00, were brought in during 2012. So, chuck those shells back into the water, or get them to a recycling center. 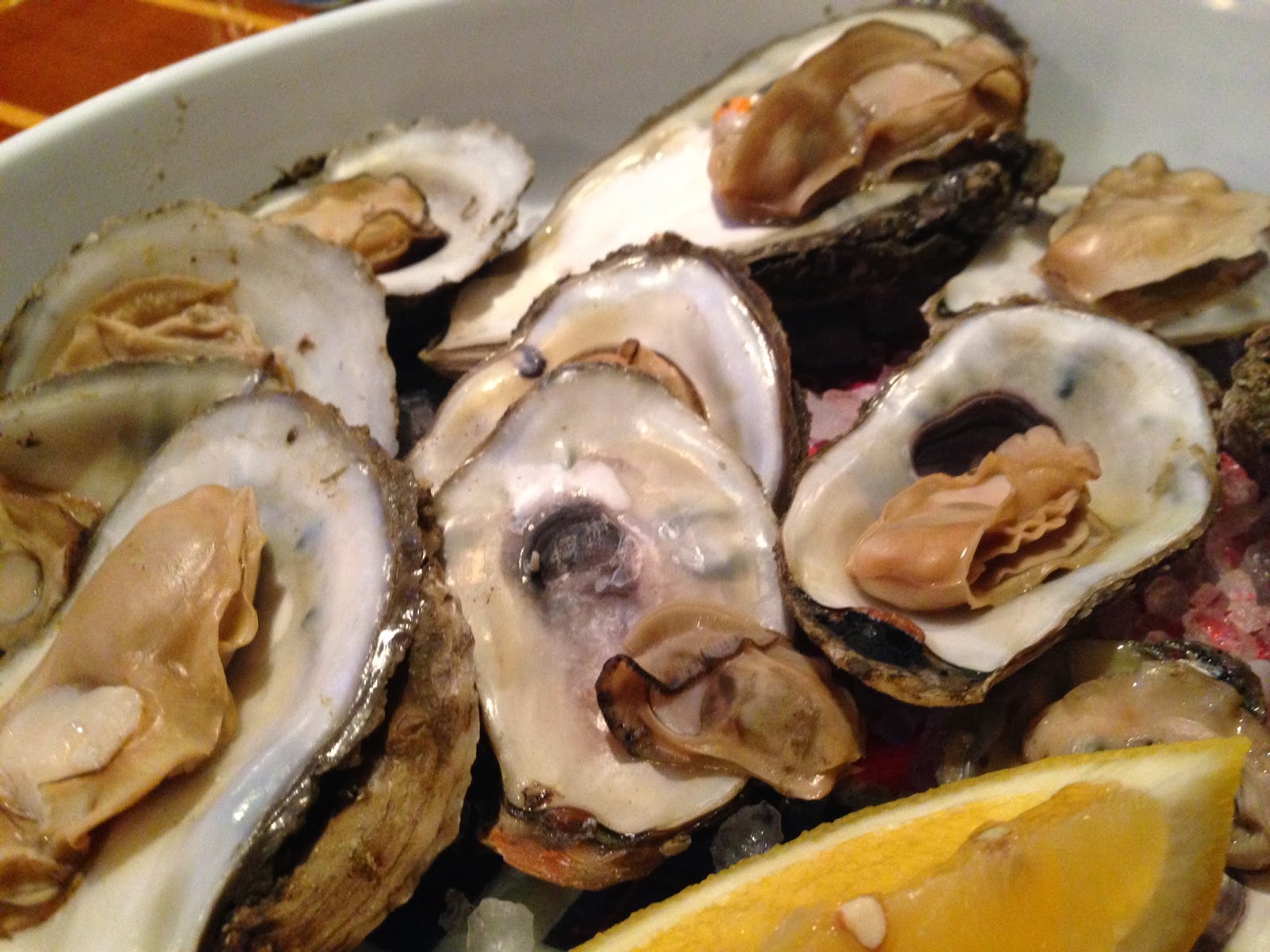 Finding fresh, local NC oysters in eateries or markets has become easier, thanks to aquaculture.  Several oyster farmers can be found scattered along our coast, from Wanchese to Bayboro to Stump Sound.

WHERE TO FIND FRESH, LOCAL OYSTERS

The acclaimed Chef & the Farmer in Kinston has opened The Boiler Room, an oyster bar that's gaining as many fans as Chef Vivian Howard herself.
Knightdale Seafood, a favorite spot for my sister, unfortunately just announced they were closing.
My friend Carroll  Leggett likes King's Crab Shack King's Crab Shack in Winston-Salem.
And on the Outer Banks, folks flock to Awful Arthur's, home of the "happy oyster."
Other foodie friends, like Sharon Peele Kennedy or Morgan Jethro,  prefer slurping oysters at their own kitchen table, or at a fold-up table ladened with oysters steamed out in their garage.
Me, I love it when my friend Tommy Manning either steams or grills oysters at the OYC, the old, quaint Oriental Yacht Club right there on the Neuse.  Or when friends down in Cedar Point near Swansboro grill us a few they've picked off the reef they've created at the end of their dock.
Where are your favorite places to eat fresh, local oysters? 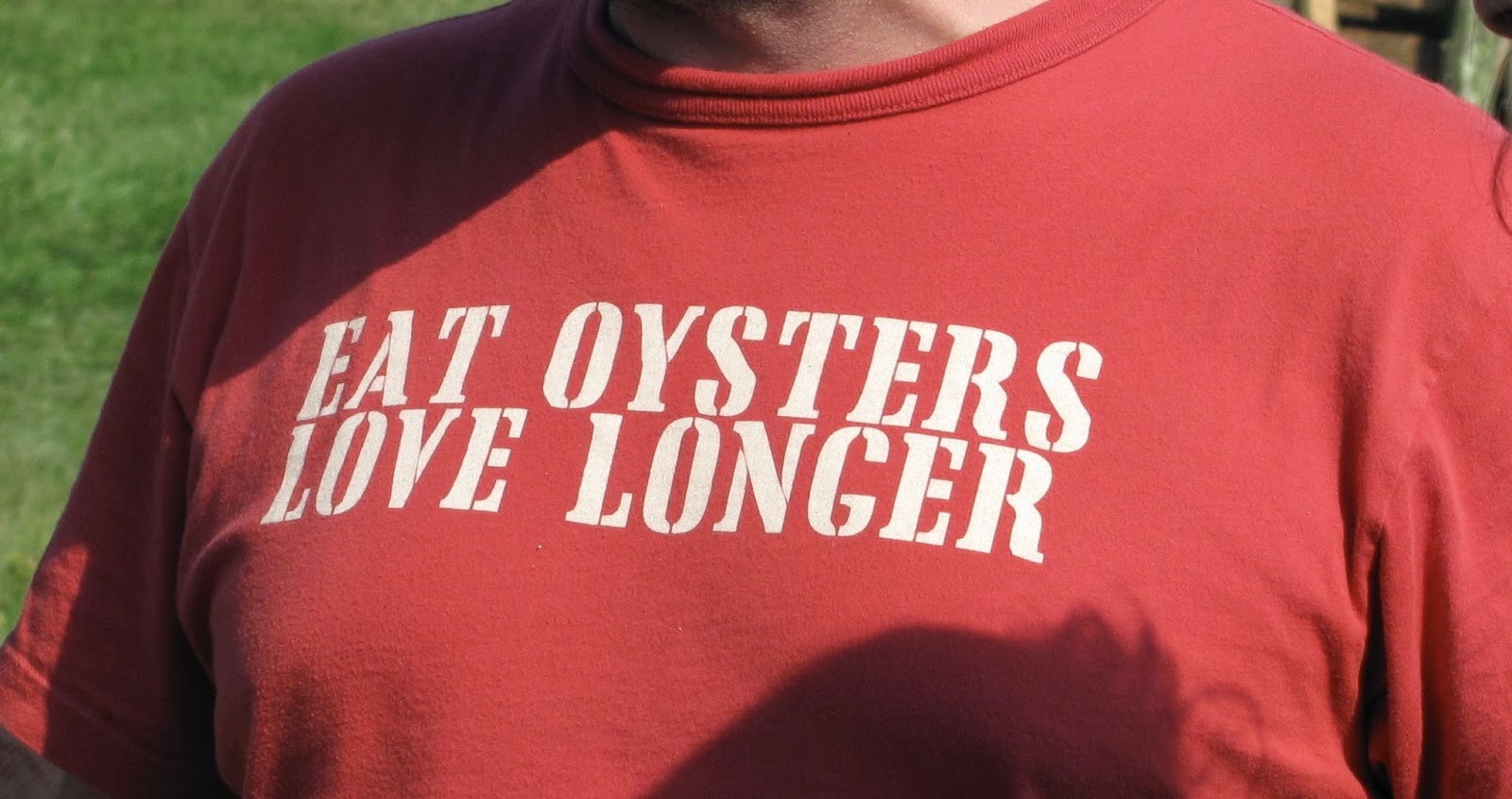 Go and eat.  Talk to the locals, the oystermen, those who live and make their living from the sea.  You'll be entertained and leave happy and full.


On March 1st, there's a statewide SHELLEBRATION, sponsored by the NC Coastal Federation.  www.nccoast.org.  You'll find food, craft, storytelling and music at Swansboro, Hatteras, Wilmington, and Raleigh.
- Wrightsville Beach, from 4 to 7 at the Tidal Creek Cooperative Food Market, with steamed oysters, chili, cornbread and dessert for $35 for members, $45 others.  Live bluegrass music, beer and door prizes.
- Swansboro, 11am to5 pm, enjoy "progressive seafood tastings" at several restaurants  $40 for members, $50 for non, includes a 45-minute marsh cruise on Lady Swan.
- Hatteras, at Oden's Dock from 2 to 5 pm, $15 per person gets you all you can eat fresh, local oysters at an old-fashioned roast.  Local band Dragonfly will be playing. (I understand there's significant roadwork being done on HWY 12 which may cause vehicles to be parked and shuttles provided, but these Hatteras folks are determined to SHELLEBRATE!)
- Raleigh, at Natty Greene's Pub & Brewing Co, all you can eat oysters clam chowder, and fried fish, all sourced from local waters, with bluegrass by Big Fat Gap, for $40 members, $45 non.

Saturday March 22nd, Junior League of Wilmington's ROAST ON THE COAST from 7 to 11 pm.  Live music, raffles and prizes.  www.jlwnc.org.

Sat April 19th, FROM 11AM TO 5PM, SMOKY MOUNTAINS OYSTER & SEAFOOD FESTIVAL.  At this "Pearl of the Smokies," you'll find oysters steamed, raw and fried as well as  peel 'n eat shrimp. All oyster shells will be recycled, and oysters come from Mobjack Bay in Virginia.  The Caribbean Cowboys will play reggae while The Mile High Band will do high energy country.