Driving up to Corolla may feel like you're driving to the end of the earth.  But there's a heavenly stop before you get to the end of the road.  North Banks Restaurant and Raw Bar, in the TimBuck II shopping center, has a fantastic menu featuring local, coastal cuisine, as well as great dishes from around the globe.  I've enjoyed many lovely meals at this casual eatery.
Here's a great recipe for Shrimp Salad that can be used to fill lettuce leaves, or sandwich wraps, or in a bun, or enjoyed just by itself.  It makes a vast quantity, perhaps good to have on hand for the start of a vacation.  Otherwise, size it down according to your needs.  If you have time, roast your own red peppers over a hot grill or under the broiler, then peel and chop.

Place the celery, water chestnuts, red pepper and onion in the food processor.  Process until all is finely minced.  (Or finely chop all.)
Transfer the mixture to a large bowl, and add other ingredients.  Mix well.  Chill and serve.
YIELD:  About 12 servings
(c) FOOD LOVERS GUIDE TO NC'S OUTER BANKS, by Elizabeth Wiegand, 2nd edition 2013, Globe Pequot Press.

www.ElizabethWiegand.com
Posted by Elizabeth Wiegand at 3:39:00 PM No comments: 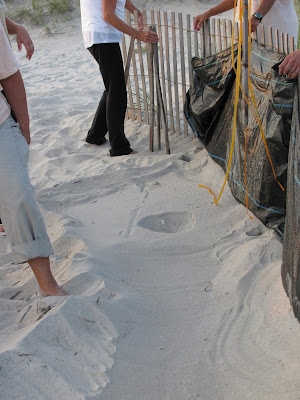 No, I do not eat Turtle Soup.  Although many years ago, sea turtles, especially loggerheads, were once fished in waters of the Outer Banks, as they were considered a prized ingredient for soup or stew.

As I explain in THE OUTER BANKS COOKBOOK, catching sea turtles involved much cruelty that would be little tolerated today, though some Bankers learned to catch the 50-plus pound creatures by hand, diving into the water to grab their shells and wrestle them to shore.

This past week, I hoped to catch a sea turtle myself, on camera, as hopefully dozens of them would emerge from their sandy nest and awkwardly flip-flop their way into the water. 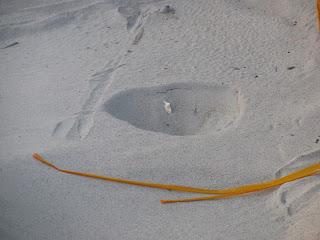 This nesting site was our destination for several of our power walks while  vacationing at Atlantic Beach, NC last week.  We learned from the volunteers sitting watch over the nest from 7 in the morning until 2 a.m. that this was one of 11 nests found within the Atlantic Beach township this year.  Last year, there was only one.

The army of volunteers are with the Sea Turtle program based at the NC Aquarium at Pine Knoll Shores.  Sea gulls and other poachers, like raccoons, like to pick off the newbies, we were told, so the  volunteer "aunties" wanted to be able to "help" the baby turtles get to the water safely once they emerged from their sandy nest.  They had erected a barrier fence on either side of a slicked -down sandy runway, and like an "auntie," would guide any baby turtles going astray. 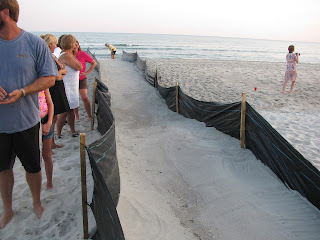 These eggs were laid 62 days earlier.  Most turtle eggs hatch between 55 to 62 days in North Carolina.  Three babies had escaped two days before, we were told. So the volunteers didn't know if they had missed the hatching during the middle of the night, or if they had hatched during a severe thunderstorm that had run a volunteer and maybe their tracks off the beach, or perhaps, if the other eggs had yet to hatch, or even, sometimes the turtles get caught in the sand and struggle to get out, thereby getting low on oxygen. They also worried that either crabs or raccoons had feasted on the buried eggs.

If nothing had happened by Day 64, they would dig up the nest at 7 pm.  I didn't mind giving up my sunset drink to witness this caesarean delivery!


Donning sterile gloves, two volunteers carefully began to scoop sand away from the indentation in the center. "Oooh, I feel wiggling!" one said.  The crowed oohed and aahed.  As they went deeper, bits and pieces of broken shells were found.  Carefully another woman picked the fragments out, some with the moist egg sack still attached. Five whole eggs were dug up.  More broken shell fragments.  But no live babies.

"That's it," one of the diggers said.  A sigh of disappointment ran through the crowd.

"Hey," said the lead volunteer.  "That means the rest of them made it out.  That's a good thing!"

She then starting laying the shell fragments in a row, and there were about 82 of them.  Eighty two hatchlings!  Another walked around with the five whole eggs, showing us the yellowed, squishy shell that meant those eggs were no longer viable.  She "cracked" each of them open, their yellow innards running out just as if they were a chicken's egg ready for the frying pan. 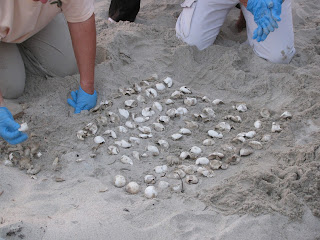 I hate to admit my disappointment in not witnessing their sandy little beings and their frantic hobble to the sea.  There seemed to be an agreement among those in the know, the volunteers, that the babies had hatched during the storm, which had also washed away their tracks.  The three that were seen early that morning were stragglers, not early risers.

Let's see this as a victory, my husband said.  That means they escaped.  They did what nature intended, without any help from us. 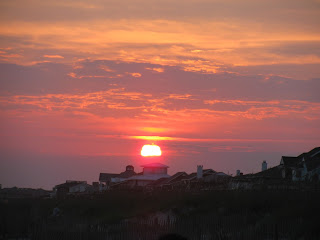 RECIPE ~ ~ ~ ~ SHRIMP BISQUE
Since I don't eat Turtle Soup, here's another classic and delicious recipe from the coast of North Carolina.

Any time you have to peel shrimp, save the shells in the freezer until you have a big bag full.  Then make a simple stock:  place the shells in a large pot, add a stalk or two of celery chopped up, about two carrots, and a small chopped onion.  Cover with water, and bring to boil.  Reduce heat and simmer for about 30 minutes.  Strain, and you’ve got a delicious base for soups or to make grits for that classic shrimp and grits.