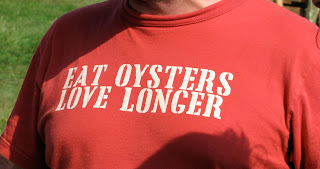 MORAL DILEMMA:  TELLING THE TRUTH ABOUT FOOD SOURCES
Me:  So where are these oysters from?
Server:  Out in the sound.
Me:  The Pamlico?  Rose Bay?  Stumpy Point?
Server:  (shoulder shrug)  They're not coming from the creeks and rivers anymore.  Government shut that down already.
The two servers are shucking a peck of freshly steamed, small oysters.  We slurp them down, dunking them first in melted butter and cocktail sauce. And we're happy.  The oysters are good, with a nice salty taste and good texture.
Georgie, the owner of Georgie's Sports & Oyster Bar, or as his wife affectionately calls it, the SOB, stops to chat.  He tells us the oysters he's getting now are pretty small to be coming out of Texas.
Me:  Huh.  Your server told us they were from around here.
Georgie:  Well, you know when folks ask where the oysters come from, I tell my boys to ask them, "where do you want them to be from?"  And laughs.
So, I'm kinda flummoxed.  I want to support this local business, because it's a sweet Mom & Pops kind of place in Belhaven, a town where there's not much else going on.  The crab processing business is gone, lost to changing traditions and the recession.  Boating is slow.  And local oysters have been staging a comeback over the past few years.
I like the friendly exchanges between us and other diners at the bar, and the way Georgie and his staff chat and check with us.  It's a simple place, with a simple menu, and it's all good.  I liked it, a lot.
But let's be honest here:  Don't tell me what I wanna know. Tell me the shucking truth.

MISSION:  WINGS & OYSTERS
It's become a wintertime ritual, making our way to Lake Mattamuskeet to see the tundra swans.  We saw several hundred feeding in the fertile, flat fields of this huge farming community, but few on the lake.  But as we drove and hiked along the paths of this National Wildlife Refuge, there were plenty of geese, ducks, ibis, glebes and a bevy of others I cannot recognize still feeding in the shallow waters 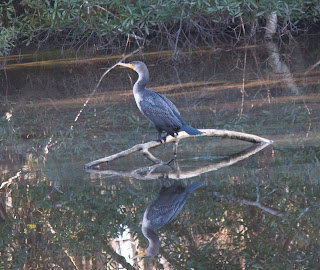 Lake Mattamuskeet is one of the "crater" lakes that dot the southeast near coastlines.  It draws hundreds of thousands of birds from Canada and Alaska, offering them a gourmet retreat each winter.

It's fascinating to watch these birds, especially when they take off at sunset for their overnight "beds."  The music of their wings and cacaphony of their calls is awesome to hear.

And what the birds love about this lake - the abundance of seafood - we humans love, too.

Georgie's family owned one of the larger crabbing facilities in Belhaven, Baker Crab Company.  That's where they'd steam the crabs, clean the meat and pack it into one pound plastic tubs.
He shared an old tub with me, showing me his mother's recipe printed on the side.  Be sure to examine and remove any shells before mixing up this traditional, Down East casserole. 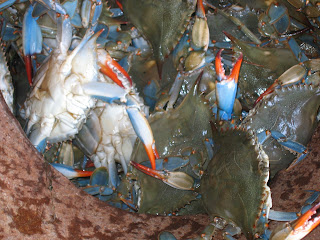 
Mix all of above ingredients (except for bread crumbs and butter).   Place in a greased casserole.  Top with breadcrumbs and dot with butter.  Bake at 325 degrees for 35 to 40 minutes.