Grits with bugs.  Conjures up those fly-in-your-face pantry moths when you open up grains, doesn’t?  But grits with bugs is how the old-timers on the Outer Banks would have described the iconic dish of Shrimp and Grits - had they ever eaten it back in the day.
Asked to speak about Shrimp and Grits at Sunday’s Brunch at the Day at the Docks in Hatteras a couple of weekends ago, I posed this to some older Bankers:  “Did you grow up eating shrimp and grits?”
“Naw.  We had fried fish for breakfast.   Or grits with runny eggs.  But not shrimp and grits.”   And, it turns out that hardly anyone did outside of the Low Country of South Carolina, until 1985, when The NY Times published an article written by a homesick Southerner, Craig Claiborne, a Mississipian by birth. 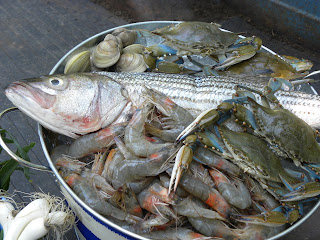 Claiborne headed south to Chapel Hill to check out the dishes he’d heard about coming from the kitchen of Crook’s Corner.  Bill Neal, owner and chef, was among the first to plan his menu around seasonal and regional ingredients.  Neal was a rural South Carolina boy who settled in the Triangle after graduating from Duke University.  He’d left both his wife and their restaurant, La Residence, which as its name implies, had a more French-influenced menu and style of preparation.  Neal took the techniques he had learned and used Southern foods from his childhood at his new place, Crook’s Corner.  It had no white linen tablecloths, but it did have a pink pig on the roof.

Clairborne was intrigued with Neal’s take on Southern foods, so he placed his big self on a stool in Neal’s kitchen and took notes.  After the recipe for Neal’s Shrimp and Grits appeared, the dish took off quicker than you can burn garlic, appearing on menus especially across the South.  Northern restaurants had grits shipped from the southern mills and shrimp from up and down the Southeast coast.  Thus, the icon was born.

PLACE OF ORIGIN
Bill Neal gets a lot of credit for Shrimp and Grits, but he was cooking from an old cookbook from the 1950s, CHARLESTON RECEIPTS.  As the recipe header noted, “Breakfast Shrimp” was a long-time breakfast favorite in the coastal region, what is referred to as the Low Country of South Carolina. That recipe called for cooking the shrimp in bacon grease, with a bit of onion and green pepper added.  A little bit of tomato catsup and Worcestershire sauce was added.
But it turns out that recipe was a gussied up version of a “poor man’s breakfast.”  Like other folks who live off the land, folks in the rural Low Country fed themselves with whatever they had on hand.  They sold the larger shrimp caught by nets and kept the small shrimp for their own consumption.   Like my grandmother, they kept a metal can of bacon grease on the stovetop, which they used to sauté the shrimp.  They added pieces of bacon, or ham scraps, if they had any, but not tasso ham, because they were not Cajun.  They didn’t use butter, because it was too precious if hand-churned and hard to keep in the hot Southern summers. Herbs and cheese?  Naw.
Bill Neal’s version is a nice riff on that basic Low Country, poor man’s breakfast, using bacon, sliced mushrooms and scallions with a little garlic and lemon juice.  And he served it over boiled grits, as the folks in Charleston did, except they called them “hominy grits.”

SO WHAT EXACTLY ARE GRITS?
Here in the Grits Belt, from North Carolina down on through Louisiana, some say Texas, too, you can find three types of grits.
All grits come from dried corn.  Duh. Then it’s ground.  Double Duh.
Well, the Charlestonians call their grits “hominy grits,” a name derived from a Native American term, “rockahomine.”  Native Americans made these types of grits from dried corn kernels that are treated with “lye,” an alkali they made by running water through ashes.  Why?  Because it would remove the outer hull, leaving a white puff of corn that they would dry, again.  It could then be stored and used whole, in a stew, like the New Mexican posole.  Or, the dried puff could be ground into HOMINY GRITS.
Interestingly, it was this process of using lye that prevented the Native Americans from suffering from pellagra, a niacin-deficiency that Europeans developed because they ate relatively nothing but corn during some mighty lean years.  The lye process changes the structure of the starch.  How smart the New World natives were!
The type of grits most restaurants and good home cooks use today are stone-ground grits.  And here’s the thing - they’re nothing new under the sun. For centuries, farmers and homesteaders have dried corn, then ground it between two large stones.  Stone-ground grits are the best tasting because they retain that outer hull, and the inner hull as well.  It’s the oils in the inner hull, especially, that add the most flavor to these kinds of grits, and the reason they can go rancid without storing them in the fridge.
The other type of grits is hardly worth mentioning.  They’re the packaged, commercially ground “Quick Grits” available on most grocery store shelves.  After both outer and inner hulls have been removed, the dried corn kernels are pulverized with steel rollers.  But that removes all flavor, and much of the richer texture.  It’s like the grated, dried and flavorless Parmesan cheese that comes in that big green box, versus a hunk of real Parmesan that’s held tight while grating it over your pasta.

SO WHY NO SHRIMP AND GRITS IN THE OUTER BANKS? 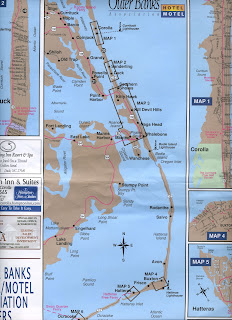 Shrimping is a huge industry on the Outer Banks today.  Ou?r barrier islands create a version of the Low Country, with inner sounds filled with marsh grass and shallow waters.

So why did no one I asked remember eating shrimp and grits while growing up?
Here’s an astonishing fact:  It wasn’t until the 1930s that folks in the Outer Banks ate shrimp.  Truly!  They did not eat shrimp!
“My grandmother thought they were worms,” said Della Basnight, a Manteo native.  “She wouldn’t eat them.  Thought we were crazy. They were bugs, for God’s sake.”
“I could see them in the ocean grass while I was out fishing,” said my buddy John Gaskill, age 96.  “But when I left Wanchese (for the Navy) in 1933, we weren’t eating shrimp.  We thought they were bugs.”
Shrimp nestle in the mud, and fouled up nets when Outer Bankers dragged the sounds for fish. 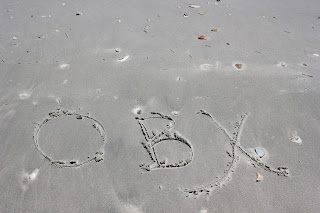 So here’s the Great Circle of Life as far as Shrimp and Grits go.  Outer Banks fishermen would pluck those nasty “bugs” out of their nets and plop them into barrels.  Then, when they got over to the mainland, they traded those stinky barrels of shrimp for barrels of corn.  It was a win-win, for the farmers used them as fertilizer, and the Bankers dried the corn, sometimes on old sails spread on roofs or bushes.  After stripping the dried kernels from the cobs, they would take them to one of the dozen windmills that dotted the Outer Banks.

Think about it:  Couldn’t do gravity flow mills using creeks or water wheels on the flat beaches, now could you?  So they built German post-style windmills, that could be turned to face whichever way the wind was blowing.  The blades of the windmill could be covered with sails, so as to better control the speed of the turning stones.  If the mill got going too fast, the stones would scorch the corn.  The summertime breeze was sometimes nonexistent, so the sails helped there, too.  And so that’s how the Outer Banks got their cornmeal and grits – sometimes traded for “bugs” or shrimp. 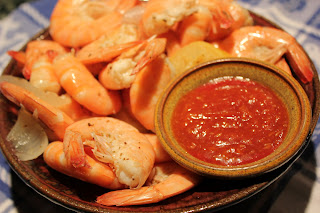 Native Americans ate shrimp, say archaeologists.  But European settlers were a little slow in catching on to this succulent protein from the sea.  Like with the blackened red fish craze, folks in the New Orleans area introduced the rest of the new settlers in America to eating shrimp.  Records show that in 1735, seine nets were ordered from France fishermen from New Orleans.  They dried the shrimp in the sun, as the Chinese and Mexicans had for centuries.
Southport, near Wilmington, was the first seaport in North Carolina to build a shrimp cannery in the first decades of the 1900s.  Diesel engines, adapted for boats, played a huge role, allowing the use of “otter trawls” rather than a large seine net that could only be used in shallow waters.  Then ice became readily available from ice plants.  The small island where the Roanoke Island Festival Park is today was once called “Ice Plant Island.” 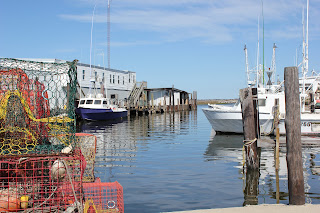 Some fishermen left Wanchese, the big fishing village even today on the Outer Banks, and headed to the Gulf of Mexico during the 1930s to learn how to shrimp.  When they began pulling nets for shrimp, they were called “bug hunters” along the coast of North Carolina.
The shrimp industry steadily grew from just a couple hundred of thousand pounds in 1931, to more than 10 million pounds caught in the wild each year today, making it NC’s largest seafood industry.

TODAY’S SHRIMP AND GRITS
Check out the menus in many of the restaurants that dot the Outer Banks, and you’ll find their version of Shrimp and Grits.  Some will be served with cheese grits, some with creamy grits and creamy, thick sauce with the shrimp, and some with have wild mushrooms or roasted garlic or diced tomatoes.  Most feature andouille sausage or smoked bacon.
Even though the dish has no culinary history on the Outer Banks, let’s claim them anyway.  After all, we’ve got shrimp – those bugs that used to foul up nets – and we had grits, thanks to windmills and barrels of stinky shrimp.
Hatteras Island chef and Seaside innkeeper, Chris Latimer, created a marvelous Shrimp and Grits for the Days at the Docks brunch, using fresh Pamlico shrimp from fishmonger Jeff Aiken, along with andouille sausage, roasted garlic and fresh bell peppers prepared in a deep, dark roux.  Fresh, stone-ground grits were donated by Carolina Grits & Co of Rocky Mount.  What a marvelous treat!