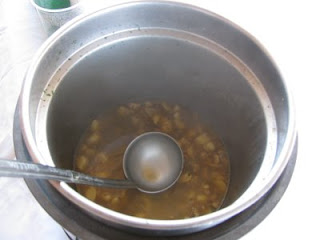 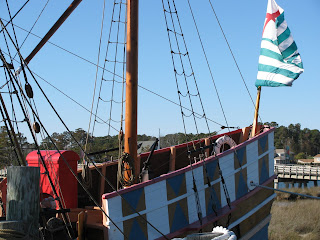 CLAM JAM - A CHOWDER COOKOFF, part of the 25th Anniversary Commemoration of the Christening and Launching of the Elizabeth II, had this Elizabeth judging six different clam chowders put forth by area restaurants.  The rules were simple -the ingredients had to be traditional, and for the Outer Banks, that means just 5 ingredients - clams, potatoes, pork, onions and water. 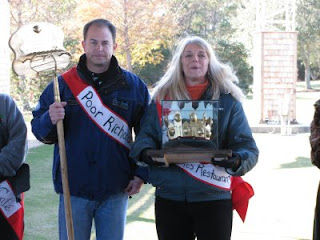 Judging is a difficult job.  Blind tastings led us immediately to two very traditional renditions, the winner by Sam & Omie's Dolly Gray Jones, with its balance of pepper, clams and tender veggies.  The runner up, Basnight's Lone Cedar, featured small, whole clams.  The addition of carrots DQed one, and another pushed the envelope with sweet potatoes that overpowered the taste of the clams.  The newly crowned Clam Jam Queen, Dolly, was so pleased - the recipe was her mother's, and it was her mother's birthday.  Trust me, only the food gods rigged that! She promises not to substitute her crown for her motorcycle helmet.
The People's Choice Award went to Poor Richard's.  For five bucks, attendees could taste all of the chowders, and cast their clam shell for their favorite. 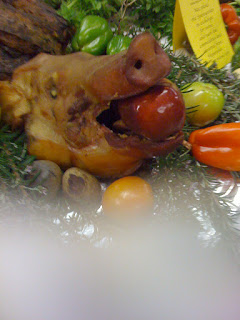 LOCALVORES -    Friday evening's reception in the Boat House featured ingredients settlers brought with them or found on Roanoke, including a whole roasted pig, smoked trout, steamed vegetable bundles and champagne - not authentic but at least from the Biltmore Estate.  Ocracoke's own Molasses Creek played their awesome bluegrass music.
On Saturday, a replica of the Elizabeth II was launched - and wasn't lost in the strong wind.  The crowd paraded behind the bagpipes and the Queen to the Festival Park, were they tasted the clam chowder and were treated to slices of a huge cake. 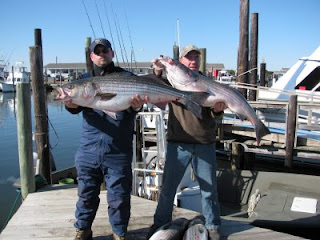 OREGON INLET FISHING REPORT
Couldn't resist popping into the Oregon Inlet Fishing Center to see what the charter boats were bringing in.  Sunday, the catch of the day was stripers.  Big Boys, 25 to 35 pounds, caught just outside in the wash of the inlet.  One fellow had trimmed the loins from each side of the backbone, a present he's taking to his mother for Thanksgiving.  He hopes she's do it "the traditional way", baking it with bacon, onions and potatoes.  One fish would feed a multitude at that size, and there were several very happy fishermen on the dock.
In THE OUTER BANKS COOKBOOK, you'll find that traditional recipe, as well as a recipe for grilling Striped Bass, a terrific way of preparing this firm but delicately flavored fish with butter, herbs and lemon.
Basically, what you want to do is to melt butter, parsley, scallions, salt and pepper, and lemon juice together, then brush that mixture over the whole fish or fillets.  Place lemon slices over and/or in the fish.  Then grill, covered, basting occasionally with butter mixture, until fish flakes easily.  Time depends on thickness, and whether filets or whole fish.  Garnish with more thin slices of lemon.
Posted by Elizabeth Wiegand at 1:31:00 PM No comments: 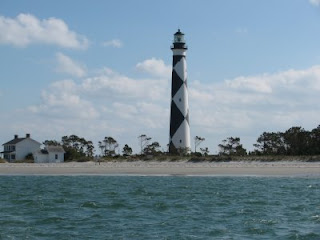 GREEN TAILS are in the markets now....and they're considered NC's gourmet species.  I'll be picking up my order of shelled, deveined one-pound packages from Atlantic Beach Seafood soon, and I can't tell you how very practical and sweet it is to pull one from the freezer, say next March, when not much in the way of fresh seafood is available.  On Veteran's Day, we enjoyed a boat ride over from Morehead City to Cape Lookout, where we frequently find the shrimpers at rest on Sundays and some afternoons.  Bottlenose dolphins were chasing schools of menhaden just off shore, which means the blue fin tuna should be showing up soon.  Let's hope some Carolina fishermen land one of these big boys, usually sold for thousands to the Japanese.  Understand the sea trout were a big catch right in the inlet.
SEARED SHRIMP 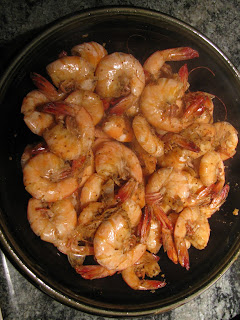 Lynne Foster, who lives in Hatteras and helps run THE ALBATROSS FLEET with Capt Ernie Foster, wrote on this wonderful new blog by Amy Huggins (www.obepicurean.ning.com), about a new method, at least to me, of cooking shrimp with the shells and/or heads on.  In a hot pan, she places the shrimp.  No oil, no water, no seasonings.  Stir until the shrimp turn pink.  They'll release some liquid and stew in their own juice, so to speak.  Lynne takes them off the heat and adds a sprinkle of celery salt and Old Bay.  We loved them done this way.  They were succulent and juicy, and dipping them in the released liquid was a tasty alternative to cocktail sauce.
FINCH POTTERY OPEN HOUSE was quite a success for selling THE OUTER BANKS COOKBOOK.  I sold out!  The book has gone into its second printing, and I had all thebooks the warehouse had left at the time.  Don't worry, they're back in stock, and make excellent Christmas presents.  If you'd like, I can sign them for your special recipients!  Just contact me.
I'll be in Manteo this weekend for the 25th Anniversary Commemoration of the Christening and Launching of the Elizabeth II, the replica of the English ship.  Fred Thompson and I will be judges for the Chowder Cook-Off!  Boy, am I looking forward to that!
Posted by Elizabeth Wiegand at 5:10:00 PM No comments:

Click on the photo for directions.....Hope
to see you there!

Posted by Elizabeth Wiegand at 9:51:00 AM No comments:

WHAT TO DRINK WITH COLLARD GREENS 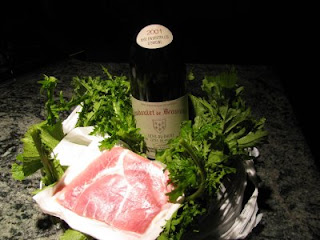 was addressed by the wine guy, Andy Chabot, from the acclaimed gourmet inn, Blackberry Farm in Tenn. who spoke at the Southern Foodways symposium.
Take your finger and trace the latitude from the mid-South across a globe, and where do you wind up?  Southern France, northern Spain and Italy.
So choose wines from these regions to pair with the South's grandest cuisine, even if it's collard greens.
Pork, esp, goes well with earthy, peppery Rhone wines (photo - country ham sample from Junior Johnson - yeah, the old race car driver/moonshiner, along with henpecked mustard, paired with a lovely Beaucastel from the Chateauneuf du Papes region).
Italy's Piedmont region matches with Southern foods well, with wines made from the Nebbiola grape that has more tannin and acid.  Look for Barolos and Barbaresco, if you can afford them.
From the foothills of the Pyrenees in NE Spain, try a Priorato, made from the grenache grape that's also found in most Rhones.  They're high in alcohol, have a mineral taste, and forward fruit that stands up to Collard Greens! 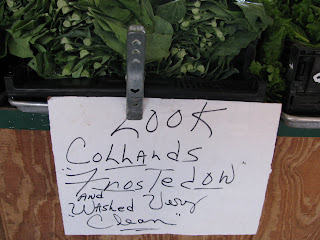 "FROSTED ON" COLLARDS
I've always heard that collards need a good frost in the fall before they're good to eat.  Vendors at the State Farmers Market were advertising theirs "with frost!"
Collards, mustard greens, and turnip greens are in season now. Grits love to hide in their creases, so they have to be washed and washed and washed before chopped and cooked.
The traditional way to cook any of these is to simmer for about at least an hour with a piece of pork rind or ham hock, even bacon.
I prefer to do a coarse chop, then brown a piece or two of bacon, then place the greens, wet, in the grease and sautee just for about 12 to 15 minutes, sometimes with a sprinkle of red pepper flakes.  Then, when they just are tender, I splash balsamic vinegar over them.  Delish! 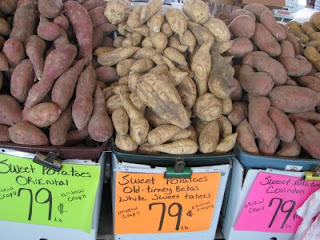 Covington Sweet Potato Hash
Last night, I cubed a couple of Covington's, admiring their nice red skin and bright orange flesh.  I placed those cubes in a saute pan and added enough water to cover the bottom, then let that boil for just a few until the potatoes were just tender.  Then I drained them, added chopped sweet red onions to the pan with olive oil, sauteed them until soft, added the sweet potatoes back and sprinkled them with some chopped fresh rosemary.  Salt and pepper, and oh my!  A great dish, fresh from the morning's foray at the farmers market.
Posted by Elizabeth Wiegand at 12:50:00 PM No comments: