TWO PLACES WHERE YOU NEED TO EAT BEFORE YOU DIE 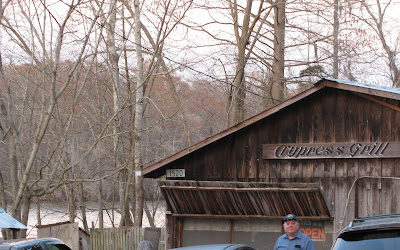 Hey, I'm not kidding. You need to eat here. Now. You've got two months left before it closes for this year, and who knows if the Cypress Grill in Jamesville will survive hurricanes and the economy for yet another season. Although, it's been open for business since 1936 and the place stays crowded.
Eat a bit of history at the Cypress Grill, NC's only remaining "cook up" shack, those impromptu eateries that lined the Roanoke River each spring during the annual herring run.
And I do mean "shack." Stains run a few feet up the old board-and-batten siding, made from cypress harvested from the trees interspersed with tupelo gums that grow up and down the Roanoke River. Inside, crude booths make you sit up straight, and a sideboard full of pies remind you to save room for dessert.
Articles singing praises about the place, from Gourmet, Southern Living, and the Smithsonian, hang in frames on the wall, along with photos of a nine-foot, 92-pound diamondback rattlesnake caught nearby. 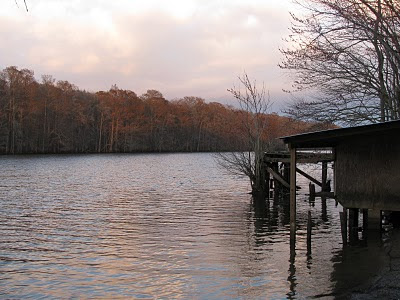 Turn off of HWY 64 into Jamesville, then head to the river and head right till you see a small sign for the Cypress Grill. Go down to the boat ramp, and it's on your right.
WHADDYA EAT?
Herring and/or shad. You can have either "sunny side up," meaning crisply fried till golden, or "cremated," cooked till hard and crunchy. Each fish, headless but with its tail, is gutted, then slashed or what they call "notched" to the bone several times, rolled in cornmeal, then put into the fryer.
Herring is a fishy fish. You gotta like fish, oily fish, to like herring.
And you've got to deal with bones. Lots of bones. Not for the squeamish or picky eater, herring is a primordial sensation. But you need to eat it, here at the Cypress Grill, at least once in your life.
"Scrape the meat up with your fork down the middle," our waitress recommended when my husband asked her how to eat it. That was after she rolled her eyes. "Or, just pick it up and scrape it with your teeth. And you can eat the bones." Now my husband rolled his eyes.
And you need to try the ROE, as well. We missed out on the roe by one week, said our waitress (last week of Feb 2011). Herring and shad roe are an Eastern North Carolina treat that old-timers really look forward to. The roe is also rolled in cornmeal, then fried, and served with scrambled eggs. In years past, I've enjoyed its naturally salty, fishy taste and crunch.
Save room for the homemade lemon and chocolate meringue pies, made by owners Leslie and Sally Gardner. I can personally attest for the scrumptious fudgy chocolate version with its cloud-like meringue.
The Cypress Grill is open from January through April, in Jamesville, NC. (252) 792-4175. 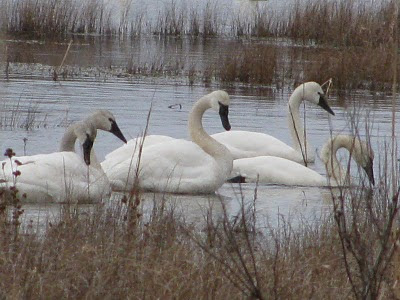 A DAY DOWN EAST
We feasted with our eyes and ears, too, during our day Down East.
Tundra Swans beckon us to Lake Mattamuskeet each winter to watch their graceful movements in the shallow water. One year we were so lucky to watch hundreds of them take off, right at sunset, for their beds somewhere west. At February's end this year, only dozens remained, but there were egrets, hawks, herons, and all sorts of ducks to amuse us. 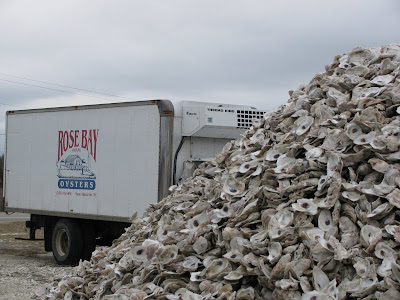 ROSE BAY OYSTERS
Along Swan Quarter, near the ferry that goes over the Pamlico Sound to Ocracoke Island, there are names that make oyster lovers swoon. Rose Bay. Engelhard. Stumpy Point.
On our way to Lake Mattamuskeet, we stopped at this oyster processor. It's the only one left in this area that could be likened to California's Cannery Row, with dozens of big oyster canneries that employed the locals and migrant labor, too. Back in the '70s, oysters just about disappeared from NC's waters, due to over-harvesting as well as the draining of land with canals and ditches that dumped too much freshwater and pollutants into the sounds. Oysters have made a comeback, thanks to regulations and efforts to re-establish oyster reefs with used oyster shells and other materials.
Oysters from the natural half-moon-shape along this inner coastline, known as Rose Bay, are today prized for their salty yet sweet, briny taste. In season, during the colder months, you can now get oysters from Rose Bay at a couple of oyster bars across the state, even in Cary.
We headed to Williamston, to Sunny Side Oyster Bar, an icon in North Carolina. . . . one of those places you just have to eat at before you die. 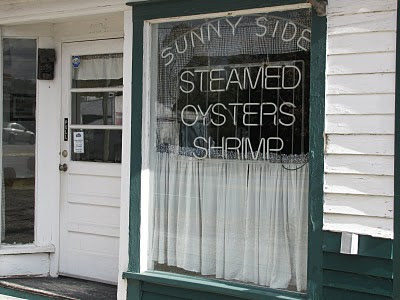 THE OTHER PLACE TO EAT DOWN EAST BEFORE YOU DIE . . . .
Sunny Side has been open for business since 1936. When new owners took over in 1991, they decided it needed little improvement, and tried to leave it as it was.
That included the use of sawdust, cedar shavings, on the floor of the horseshoe bar. No kitchen, but rather an outdoor roaster, where galvanized buckets of oysters are placed to be steamed. The swinging hook and circle to amuse you while you wait. And a big dance floor where you can boogey to live music some weekends.
You might have to wait 30 minutes or more to belly up to the oyster bar, which occupies the room in back. But it's worth the wait, and lately, the oysters have come from NC waters, like Rose Bay.
Passing time while our oysters were steaming, one of our party was game to try "The Rooster" - an oyster on a saltine, topped with a bit of horseradish, then a habanero pepper and more hot sauce. Folks around the bar chided and peppered her with dares to "just do it," then cheered loudly as she sputtered down a beer.
"Geezer," like many of the shuckers, has been working at Sunny Side for decades. He poured melted butter into a small bowl, and filled another with a warm, slightly spicy hot sauce whose recipe, bought back when the place was just opened, is still a secret.
Geezer returned from out back with our bucket, a peck of Rose Bay oysters lightly steamed, which he swiftly and deftly opened one by one, laying each like a pearl into a bowl in front of each of us.
Those Rose Bay oysters were plump. Salty, tasting of the sea. Done to perfection, still juicy. Like jewels themselves.
"Ever found a pearl?" asked the guy next to me. "My wife has a jewelry box full of them," Geezer answered. "If she hasn't lost them."
Sunny Side Oyster Bar, 1102 Washington St (where US 17 & 64 meet), Williamston, NC (252) 792-3416.
Posted by Elizabeth Wiegand at 3:34:00 PM No comments: 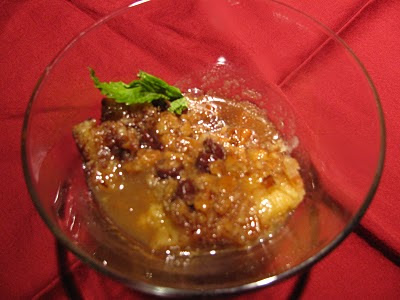 Okay, I admit it. I am "ruint." After a sweet sail in the Caribbean, I returned home pouting. So I sought some comfort food.
Bread pudding soothed my soul that was plagued by our winter weather.
It's a magical dish, turning leftover stale bread into something so sweet and delectable. Called "poor man's pudding," it's a good way to use up leftover loaves of French or country white bread that has a bit of texture to it. Soft, fluffy bread just will not do.
I thought bread puddings were a just a Southern thing until I did some research. Turns out just about every cuisine has developed a sweet way of using up yesterday's manna. Bread pudding is famous in New Orleans, usually made with golden raisins and smothered with a bourbon sauce.
DOUSED IN LOCAL BREW
For THE NEW BLUE RIDGE COOKBOOK, I found a marvelous recipe for bread pudding while visiting a brewery near the Blue Ridge Parkway at Afton, VA. Blue Mountain Brewery is a fabulous place, with great scenery and a crop of hops just out the front door. I'd never seen the tall vines growing before.
Virginia used the be the hops capitol of the New World, but these days most hops are grown in the Northwest of the country. So it's a bit unusual to find a nearby brewery that grows its own hops for fermentation.
Blue Mountain Brewery has several varieties of beer, but there's one that matches up with Bread Pudding just perfectly, at least the way co-owner Mandi Smack makes it for their tasting room. She adds chocolate chips and nuts for a crunchy topping, and soaks it all with their Evil Eight Degree, a dark, caramel and chocolaty flavored ale. I fell in love with it at first bite, and begged for the recipe.
Please note that if you cannot find that particular bottle, substitute a dark, Belgian-style ale. Make it a local brew, if possible.
TV DEMO
Roanoke's WSLS10 noontime show, Our Blue Ridge, has invited me several times to prepare some of the recipes from THE NEW BLUE RIDGE COOKBOOK. It's a live show, and I get FOUR minutes to complete a dish. Four. It's been fun to do, and I love working with Natalie and Jay, the hosts, and their producer, Stephanie.
Catch my latest episode where we make this very Bread Pudding!
http://www2.wsls.com/entertainment/2011/feb/18/chocolate-and-brew-bread-pudding-ar-852725/
Recipe follows.... 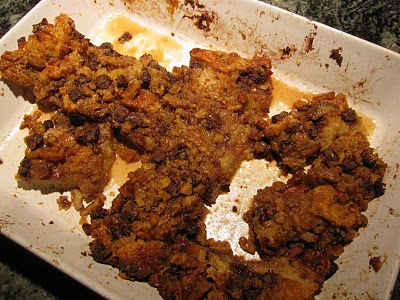 Barbecue, ramps, sweet potato pie. Yes, indeed, we've got great things to eat here in North Carolina, just as they do in MOROCCO.
And that's what two prominent travel publications think.
They've ranked both Durham and Asheville in the same keeping as MOROCCO.

It's not often that Durham, NC is thrown in as a destination with the likes of Morocco, Zanzibar, Greece or China. But a recent Sunday NY TIMES Travel piece placed this Tar Heel city in WHERE TO GO.
I'll be posting about SCRATCH BAKERY soon, as I've stopped in several times. Read on.
http://travel.nytimes.com/2011/01/09/travel/09where-to-go.html?pagewanted=4&sq=January%209,%202011&st=cse&scp=2

35. Durham, N.C.
A downtown turnaround means food worth a trip. A decade ago, downtown Durham was a place best avoided after sundown. But as revitalization has transformed abandoned tobacco factories and former textile mills into bustling mixed-use properties, the city has been injected with much-needed life. In the heart of downtown, a crop of standout restaurants and cafes has recently sprouted around West Main Street, where low rents have allowed chefs and other entrepreneurs to pursue an ethos that skews local, seasonal and delicious.

The farmers’ market favorite Scratch Bakery has a brand-new storefront for its seasonal homemade pies that include chestnut cream pie and buttermilk sweet potato pie. At the cafe-cum-grocery Parker and Otis, the menu features sandwiches made with freshly baked bread from nearby Rue Cler and locally roasted java from Durham’s Counter Culture Coffee. And at the sophisticated Revolution, squash tamales, mascarpone gnocchi, and tuna with wasabi caviar rotate through the seasonal menu. 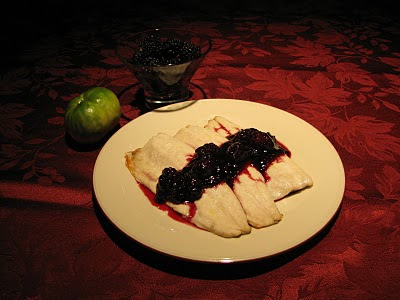 Why Go Now: Get a taste of Asheville while it still feels local and before it goes global. On the edge of the alluring Smoky Mountains, the food and drink scene of the recently dubbed "Beer City USA" is the perfect compliment to the scenery. You'll find over 30 galleries and 20 music venues devoted to everything from folk pieces to modern mash-ups.