I was in a pickle, so to speak.  My kids are grown.  No more Easter Bunny.  It seems we are stuck in the Grinch of Winter's wrath still, despite the daffodils and hyacinths.  Bah Hum-Bunny?
Rather than rain on the Easter Parade, I decided to celebrate the Spring Awakening anyway.

How?
I've dyed eggs naturally, boiling and soaking them with onion skins, blueberries and even dandelions.   We tied them up with my old pantyhose (God, did I really use to wear those things?) and placed parsley leaves within to make the pattern on the dyed egg.
We've had neon-colored eggs, definitely not found in Mother Nature's palette.
Chocolate-covered eggs?  Filled with truffles?  Bring them on, but I won't make them.
But then I had lunch in Chicago at Epic on Hubbard St., and found the perfect solution.  The special of the day was the above gorgeous Salad Nicoise, with seared tuna smeared with tapenade, whole capers, and pickled eggs.  A gorgeous pink, those pickled eggs. 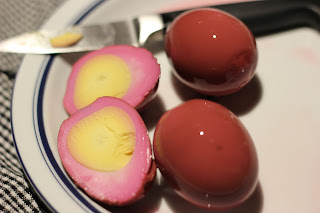 Here's what you do:   Gently boil eggs.  My jar could hold nine, so I placed them in one layer in a pot, covered them with cold water, and then over medium high heat, brought them just to a boil.  Then I turned down the heat, and let them simmer for about three minutes.  Turned them off.  Covered the pot.  Let sit for 10 minutes.  Then, I emptied the hot water and ran cold water over them until the eggs felt slightly cool to the touch.  Then I refrigerated them, which allowed me to peel them with no hassles or ugly tears.  Magic! 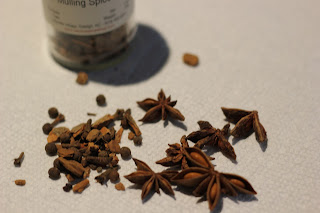 Next came choosing the spices.  Pickling spices are what a lot of recipes use, and of course, that's what I did NOT have in the house.  So I decided on star anise and some mulling spices, very similar to the list of ingredients traditionally used in pickling spices. 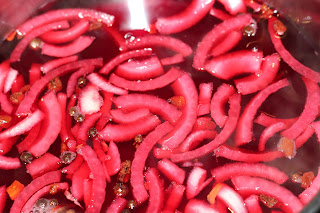 Because I wanted pink eggs, I cooked some beets in water (I prefer them roasted). 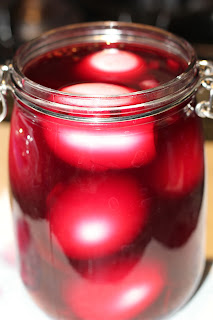 Saved the red cooking liquid.  Added it to vinegar, onions, and spices.    Brought it to a boil then simmered for about five minutes, until the onion was translucent.  Let it cool for a bit, about 10 minutes.

Meanwhile, I peeled the eggs.  Placed them in a sterilized jar.

When vinegar liquid was cool, poured it over the eggs.

It takes a few days for the eggs to marinate in the pickling liquid, and then you can use them.

And, if they should last that long, you can keep them in the refrigerator for up to a month.  They will gradually get an even deeper, browner red, as mine did.

Peel the beets and cut them into quarters.  Place in a pan and cover with water (at least 1 1/2 cups).  Cook until beets are tender, about 30 minutes.  Reserve one cup of the beet cooking liquid.  If you'd like, chop up some of the beets to put in the jar, which will give you pickled beets as well.

In a medium saucepan, place the cup of reserved beet juice, the vinegar, onion, sugar, anise and spices. Over medium high heat, bring to a boil, then turn heat to medium and cook for about five minutes, until onions are translucent.  Let the mixture cool.

Meanwhile, peel the eggs and place them in the jar.  Add the beets if desired.

Pour the cooled vinegar mixture over the eggs in the jar.  Put the top on the jar, then refrigerate.  They're ready to eat in 4 to 5 days, and will last for up to a month in the refrigerator.