WORTH A GRAIN OF SALT - Outer Banks SeaSalt 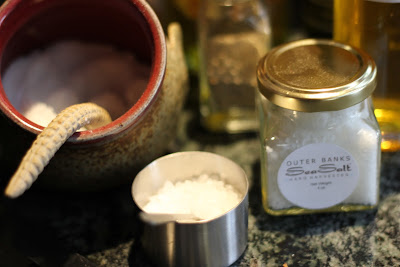 What's With All the Salts?

"Salt is food's mouthpiece," declares Tamar Adler in her marvelous book, AN EVERLASTING MEAL. How right she is.  Salt makes things taste better, complements other tastes, and helps make the food shine like it's supposed to.  Ever accidentally left salt out of a cookie recipe?  They taste flat.  Or the worst for me was bread dough that took two days of rising and kneading then spraying and baking and praying, and after all that, when I broke into that bread, I cried.  I had forgotten the salt.

We add salt to boiling water for pasta.  Add salt to rice.  My granola recipe tastes so dull without a bit of salt.  Cakes, pies, cornmeal.....they all call for at least a teaspoon of salt.

Amy Huggins Gaw, aka The Outer Banks Epicurean, is an accidental "saltist," she says, and taught me how to "finish" with salt, sprinkling a touch over just-from-the-oven brownies.  They went from being great to being sublime.  That hint of salt makes the chocolate just jump out at ya.  And just a pinch of sea salt rubbed between your fingers over steaks still warm from the grill?  Oh, mighty fine. 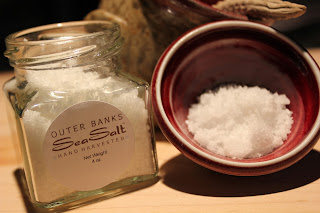 As the "accidental saltist," Amy's worth her weight in the white powder, as the knowledgable and creative force behind Outer Banks SeaSalt.

So how does one make salt?

Wading out into the Atlantic Ocean near Kill Devil Hills, Amy and husband John Gaw gather buckets of sea water, which they take back to their working kitchen.

Ten gallons at a time are put through a two-day process of heating up, resting, and heating up again to get the water to evaporate and allow the salt to crystallize.  She estimates that one gallon of water produces only three and a half ounces of salt.  That's over a gallon of water to produce that small bottle of Outer Banks SeaSalt pictured above.

It's a very flaky salt. Too coarse for a typical salt shaker, it can cake together, as it has no preservatives.  Amy says she shudders when sees anybody shaking up her jars.  But that really doesn't bother the pure, clean taste of this sea salt.  And what better way to have a taste of the Outer Banks?  If you'd like to order some or find stores that carry her salt, check out her website here.

Be sure to try Amy's terrific and easy recipe for salty, candied pecans, listed below.

NOT THE 1ST SALT "WORKS" on the COAST

Before the advent of "making" ice, salt was vital.  It was used not just to season, but to preserve.  Meat was salted and dried, as was fish.

How important was salt?  Back in 1775, there were three laws on the books of the fledging Provincial Congress dealing with salt.  One set a price ceiling; another rationed the salt supply; and the other offered a reward for the first person to establish a salt "works."  A century later, there were several producing salt along NC's coast - in Currituck County in the Outer Banks, others near Beaufort and Morehead City, and down around Wilmington.  You can still see the outdoor salt oven and huge cast iron pans used at the Sloop Point Plantation near Topsail Beach.  Confederate soldiers received a pound and a half of salt per month among their rations.

Earlier, during the Revolutionary War, salt became really scarce; thus those three laws.  British ships captured salt shipments from the West Indies.  Pirates did, too.  Ships carrying supplies sank.  Folks were getting desperate all over the South, especially along the Outer Banks, where salt was used to store fish.  Remember, no ice!

So a plea from the Outer Banks was raised to the new Congress in Philadelphia, and Benjamin Franklin sent the Outer Bankers a gift: a pamphlet describing how to go about making salt from sea water.  Salt "boiling" soon got underway, and it was reported that "....every Old Wife is now scouring her pint pot for the necessary operation."

Evaporation is not the only source of salt, however.  Morton Salt lists facilities in Texas and Louisiana where underground salt deposits, called salt domes, are mined, then processed to strip away minerals to make it pure white, and anti-clumping chemicals are added. Other salt deposits rim the Great Lakes region, and there's one in Kansas.  China is second only to the US in salt production.

One could argue that all salt was once upon a time a product of the sea, even if it was trapped below the earth's surface, right?

You'll see several varieties of big chunks of salt in various colors for sale now at gourmet shops, sold with a salt "grater," too.  And there are so many varieties of "sea salts," like flour de sel, the premium and most expensive salt that's skimmed from salt ponds by hand; and Celtic and Himalayan, which claim more healthy nutrients because of their gray and pink colors, respectively, which represent different elements.

And then there's kosher salt, that's been pressed and re-cut, and dissolves more quickly so tastes saltier even though it isn't.  And we've all poured rock salt on the ice in our ice cream makers to keep the temp as cold as possible.

This old salt could bore you to tears about all the types of salt available.  Take this with a grain of salt:  on my stove there are three container, one filled with "sea salt" from a grocery store shelf; one with kosher salt; and the best, in my book, a container of Outer Banks SeaSalt.

If "you're worth one's salt" in the kitchen, just try a variety of salts and see what works best for you. (That phrase came from Roman soldiers being paid an allowance of salt called a "salarium," what we call a "salary" today.)

RECIPE from THE OUTER BANKS EPICUREAN
Amy Huggins Gaw, aka The Outer Banks Epicurean, (also on Facebook) graciously allowed me to share this recipe, which she uses to top off a sweet potato dish with caramel sauce....so very good I don't know if it's a veggie or a dessert!  These pecans make a great snack or appetizer, or as a nice surprise in a salad or topping for casseroles or cakes......  Enjoy many ways!

Toss pecans in the melted butter, then roast in a preheated 300 degree oven for 20 to 25 minutes, stirring frequently.  Cool.

Combine sugar, cinnamon, salt, and water in a saucepan; cook, stirring, over medium heat until sugar is dissolved. Boil to 236 degrees, the soft-ball stage.  Remove from heat; add vanilla and pecans and stir until mixture is creamy.

Turn out onto waxed paper and use a fork to separate pecans.  These are vey hot.  Wait for them to cool before you pop one in your mouth.  At this point you can hit them with another pinch of SeaSalt if you are feeling extra salty.